The board of trustees held their first meeting September 5, 1917. All agreed that their first duty was to construct a suitable college building and open the college as soon as possible. There was some discussion as the the advisability of building four miles out of town and it was suggested that, perhaps, it might be better to ask the next territorial Legislature to petition Congress to grant another site near or in Fairbanks for the first college building. It would be more convenient until such tiime as a dormitory could be built. But one trustee, who felt this view to be shortsighted, said, "It may seem a good way out of town now but it won't seem so, very long. When the University of Washington was moved to its present site, there was a great wail about it being too far out, but just look at it now, with the city built up way beyond the university." 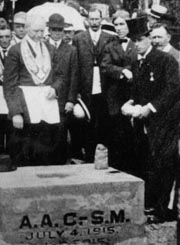 The Board of Trustees realized that it was a most precarious time to build as prices were uncertain and advancing rapidly, building materials were difficult to secure, shipping was demoralized, and, from the standpoint of economy, it seemed better to postpone the construction of the building until conditions became more normal. On the other hand if the money which our friends had worked so hard to secure, were not spent, wasn't there some danger that the Territorial Legislature convening in 1919 would repeal the law and the $60,000 revert to the treasury. That fear was so strong that it was decided to proceed with construction of the college building as rapidly and economically as possible.

Accordingly, the kind and size of building necessary to conduct the courses in agriculture and mining was decided upon. Harlan Thomas, who had designed and constructed the Juneau School Building, was consulted. He submitted plans for the central portion of the building to which wings could be added when needed and funds permitted. These plans formed the permanent plans which were later adopted.

On June 29th, 1918, the location of the building was selected, the lines surveyed and the place marked for the well according to the specifications. There was a difference of opinion as to whether the building should be placed according to the cardinal points of the compass and facing south, or diagonally across the hill facing southeast, as eventually choosen. It was of course, an unusual proceeding not to build on the cornerstone but it would have brought the building too near the brow of the hill and the trustees thought the large campus in front of the building would justify the change. The flagpole was placed by the corner-stone almost directly in front of the main entrance of the building and about 80 feet from the steps. 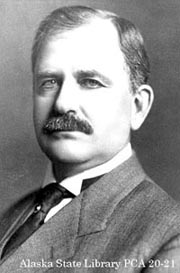