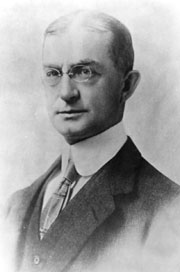 The following was reprinted from May 31, 1932 edition of the Fairbanks Daily News Miner.

Mr. Stevens was born at Goshen, Indiana, in 1864. His boyhood days were spent in the East and it was not until he had reached man's estate (editor note: he done grew up) that he started the travelings which later were to lead him to Alaska.

He received his higher education at the University of Michigan. He graduated with a bachelor of arts degree and later entered the UM law school and secured his law degree. In college he was a member of Sigma Chi national fraternity and maintained a life membership in that organization.

Shortly after graduation from college, the West called him and he took up the practice of law in Colorado. This residence continued over a period of about 18 years, during which time he was counsel for one of the large cattle companies of Colorado. Mr. Stevens was prominent in Colorado politics.

His adventurous spirit responded to the Alaska gold rush. He went first to Seattle and then to Skagway where he practiced law for a short time before moving on to Nome. Next came the news of discovery of gold in the Fairbanks district and he moved there in 1905 and has practiced law continuously in Fairbanks since that year. He was a thorough student and this coupled with the keeness of his legal mind quickly gained him outstanding success. At the time of his death he was generally regarded as one of the outstanding authorities in Alaska on mining and corporation law.

He was a member of the bar of the U.S. Supreme Court and has appeared before that body on several important cases. His practice has also brought him many times before the U.S. circuit court of appeals in San Francisco where he won many important legal victories.

This by no means exhausts the list of Mr. Steven's wide range of activities. It was only natural that he should become interested in mining. He aquired valuable placer mining ground on Engineer Creek, which he sold a few years ago to the Whitworth Mining Co. He then successfully transferred his interests to the Soo Mine on Dome Creek which was under development at the time of his death.

All of these form a noteworthy record of earnest endeavor and distinguished achievement, but those who were priviledged to have known him well hold most firmly in their memory the recollection of his genial personality and the genius of his friendship. If he was your friend he was unswerving and that sort of friendship begets the deepest loyalty. His friends found it pleasurable to drop into his office or his home for an informal chat. He had the mind of a student and one might find him reading Gibbons "Rise and Fall of the Roman Empire" or involved in the solution of some abstract mathematical problem. Only a few of his close friends knew that Mr. Stevens was a member of the Mathematical Society and that mathematics was one of his hobbies.

Just two weeks prior to his death, Mr. Stevens, as president of the board of trustees of the Alaska Agricultural College and School of Mines, had officiated the tenth-annual commencement of the college and presented diplomas to the 15 members of the graduating class. No one then guessed that in a few brief days he would be taken from our midst. Morton Stevens died on May 30, 1932.

It was fitting then that life should permit him to round out his tenth year as president of the board of trustees before death should brush his shoulder and summon him to a far country.

His colleagues on the Board of Trustees and President Charles Bunnell alone knew how well he played a major role in guiding the destiny of the early history of the Alaska College. They know that his exceptionally keen mind and unflinching courage bridged many crises and that he was always ready to put aside his own work to serve the college. It was not generally known that he was selected to deliver the commencement address marking the tenth anniversary of the College and that the precarious condition of his health caused him to refuse.

Austin Lathrop was appointed to take Morton Stevens's place on the board.