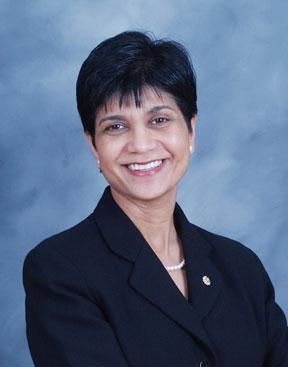 Jyotsna "Jo" Heckman was appointed in 2011 by Governor Parnell. She served as board chair from 2014-2016. Heckman earned bachelor's and master's degrees in business from the University of Alaska Fairbanks and also attended graduate school studying financial studies at Georgetown University and Southern Methodist University. Jo retired as president and chief executive officer of Denali State Bank in December 2011 after 26 years of service with the bank. She currently serves as a director on the bank's board. In addition to her professional accomplishments, she is active in various community and civic organizations including the United Way, Foraker Group, Alaska Community Foundation, Rotary and the Greater Fairbanks Chamber of Commerce. She is the recipient of the UAF Alumni Association's William Cashen Service Award and the Distinguished Alumnus Award, the Farthest North Girl Scouts Council's Woman of Distinction Award and was selected as Business Leader of the Year by the UAF Associated Students of Business.