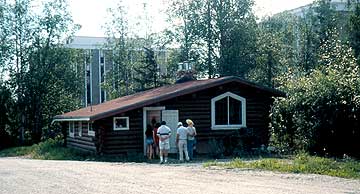 In 1935, Froelich G. Rainey became the first professor of anthropology at the University of Alaska. In 1936, he and his wife commissioned a three-room log cabin to be built on the ridge overlooking the school. They paid $5,600 for the cabin that was constructed by T. S. Batchelder and is now located between the Reichardt Building and the Moore-Bartlett-Skarland residence complex.

Because the cabin was to be built on school property, the board of regents made decisions regarding its use. The board was reluctant to set a precedent they might later regret and set a stringent list of conditions that included submitting the cost of construction to them and asking permission from the board for any renovations, additions, or leasing of the structure. They decided when the Raineys wanted to sell the cabin, the first offer would go to the board. When the Raineys left Alaska in 1942, they sold the cabin to the university for $3,750. It was then designated as housing for faculty and staff.

Early residents included Stuart Seaton and his wife as well as Harry Cheeks and Nick Eidem. Ivar Skarland, a former student of Rainey’s who later became the head of the anthropology department, moved in during the late 1940s and for many years the cabin became the special preserve of the department. For several years, university librarian John Mehler shared the cabin with Skarland and later, anthropologist Otto Geist moved in. All three men occupied the cabin for several years.

The cabin has been renovated and repaired several times, including roof repair and exterior paint in 1956. The coal- and wood-burning stove was replaced with an oil model in the mid-1960s. The building was placed on the National Register of Historic Places in 1975, and a major renovation in 1982 included roof replacement, insulation and installation of an alarm system among other things. For many years the cabin was open to the public one day a year, during Fairbanks’ Golden Days.

When Skarland died suddenly in 1965, university students requested the cabin, ski trails and a residence hall be named in his memory. Today a permanent or visiting anthropology faculty member or student lives in the cabin.