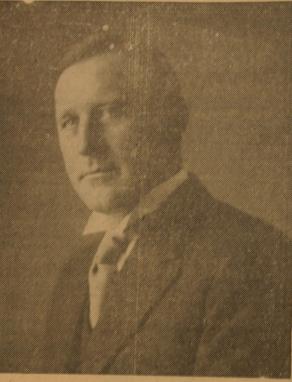 Arthur Shonbeck participated in both the Nome and Tanana Valley gold stampedes, from 1900 to 1906. He owned a store in Chatanika named Courtney and Shonbeck. He married Miss Ann Peckenpaugh. He sold his interests and went to Seattle to live, but when word came of the gold strike in the Iditarod district, he returned and made a small fortune.

He went to Anchorage when it was a tent city during the construction of the Alaska Railroad. He started with a grocery store and subsequently changed to selling heavy construction equipment, farm equipment and airplane parts. He bought real estate and became wealthy reselling it in later years. He built a three-story apartment house and was agent for the Standard Oil Company in the Anchorage area.

He was a loyal Democrat even when they were hard to find in Alaska during the 1920s, hence when the Democrats came to power with the Franklin D. Roosevelt landslide in 1932, he was mentioned as a likely candidate for governor when John Troy, Juneau newspaperman was appointed. Shonbeck served as chairman of the Third Division Democratic committee for years and became chairman of the territorial central committee from 1934 to 1937.

He may well be considered the "father" of Anchorage's aviation industry as he was an enthusiastic leader in predicting the city's potential as an air center. In the early 1920's when aviation was just getting started in the territory, he recruited a group of citizens to go with him to the park strip between ninth and tenth avenues and clear it of trees and stumps in readiness for any pilot who might want to land in Anchorage.

Shonbeck was equally dedicated to publicizing the agricultural possibilities of the Matanuska Valley right after completion of the Alaska Railroad in 1923. He owned and operated one of the largest farms in the valley, raising grains to feed cattle and horses that his neighbors owned. He took great pride in experimenting with a variety of fruits and vegetables as well.

Republican Gov. George Parks appointed Shonbeck to the Board of Regents in 1925 and Democratic Gov. Troy reappointed him in 1933. He resigned in 1936 due to the press of business. Martin Harrais was appointed to take his place on the Board.

He never abandoned his first love for gold mining. He was a ready touch for a grubstake. In later years when he retired from active management of his Anchorage and Palmer enterprises, he and John Beaton, another oldtime gold miner, acquired mining ground on Ganes Creek ten miles from Ophir. It was on a trip to inspect operations on that property that the two of them met an untimely death.

On the evening of June 20, 1945 they were riding by themselves in a pick-up truck when it went off the road just before approaching a bridge and slid into the stream. The bodies were soon recovered and flown to Anchorage.

Shonbeck was 67 years old when he died. His wife, Ann, departed from Anchorage to Glendale, Calif., soon after his death.

Arthur A. Shonbeck is also mentioned in this article