The Day They Tore the Tower Down 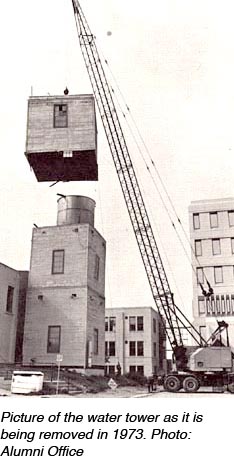 The Day They Tore the Tower Down

The only spectacle that draws a bigger crowd than a fire is a demolition crew at work. Camera fans turn out en masse for the "action shot" that will win them an Academy Award and sidewalk superintendents get into technical discussions on the merits of the plan of operation being employed. Casual passersby have an excuse to pause and rest a bit.

Camera fans, sidewalk superintendents and children of all ages gathered at the front and west side of the Rasmuson Library August 16 to witness the dismantling of the Water Tower, a campus landmark for 35 years. Built close to the north side of the present Museum building (now Signers' Hall) the tower, of frame construction, encased a steel tank measuring some 15 feet in diameter standing 60 feet high.

In the very early years, the campus water tank, of wood stave construction, was housed in a tower attached to the east wing of Old Main. But by 1938 this was inadequate for campus needs and the new tank was erected as part of a general utilities expansion program which included the construction of a new power plant and an underground "utilidor" system. Hess Hall was constructed the same year.

Situated mid-campus, on the main road between the dormitories and classroom buildings, the Water Tower had other uses besides providing water for domestic and fire-fighting purposes. For some twenty years, until street lights were installed, a lone electric light bulb with a huge white reflector protruded from the north side of the tower, providing the only outdoor lighting on campus. During World War II a siren for air-raid warnings was placed on top of the tower, and later when the James E. Barrack Memorial Carillon was installed in the Eielson Building, the carillon speakers were added. It was also a bird sanctuary for several generations of pigeons and sparrows.

The Water Tower served less noble purposes, too. During Freshman Week and on Engineers' Day, pranksters would often decorate the edifice with graffiti, posters or assorted signs. For several years the nameplate from the pilot house of the abandoned riverboat NENANA adorned the north side of the structure, causing some confusion to tourists who thought they may have misread their road maps.

But the old order changeth, and with the rapid growth of the campus during the '60s, new water storage tanks were built higher up on the hill and the old water tank was kept as a standby reservoir in case of a major fire. Fortunately, it was never needed, and because it was deteriorating with old age and considered unsafe—and somewhat of an eyesore—the campus planners voted for its destruction.

On Thursday, August 16, 1973, a crew of men with a huge crane from the Jurek Construction Co. appeared on the scene, cut the wooden tower into three 20-foot sections and the steel tank into two sections, and lifted them off one at a time. And for the first time in 35 years, campusites got to see the entire north side of the Museum building.

An inspection of the steel tank as it lay on the ground revealed that at the very top of the tank two names had been written in red crayon: "Fred Craft, Nov. 16, 1938" and "Theo. Ferminberg, Nov. 16, 1938." The date would coincide with the tank's erection. Anyone remember the gentlemen who left their autographs?