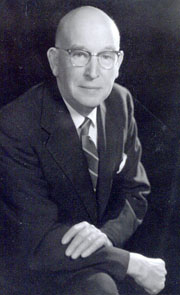 Ernest Newton Patty, was born in La Grande, Ore., on March 27, 1894. He graduated from the University of Washington in 1919 and began his career as a mining engineer. In 1922, he joined the first faculty of the Alaska Agricultural College and School of Mines as professor of geology and mining.

In 1925, Patty assumed additional duties as dean of the college and during the summer pursued his career as a mining engineer and consultant. When the college became the University of Alaska in 1935, Patty resigned to accept a position as general manager of a private mining company.

At the University of Alaska 1953 commencement, Patty delivered the main address and received an honorary doctor of engineering degree. Later that summer, the board of regents offered him the university presidency, a position he had not sought. That fall, he succeeded Terris Moore as president of the university, and remained in that position until his retirement in 1960.

During his tenure as president, the university underwent an enormous transformation. The number of faculty increased by 190 percent, student enrollment increased by 237 percent. Buildings went up to meet the new demands including Constitution Hall, McIntosh, Wickersham, Stevens, and Walsh residence halls, and the Charles Bunnell Building. Community colleges were established in Anchorage, Ketchikan, and Juneau. and a student union building, later named Constitutional Hall, was completed in time to accommodate the Alaska Constitutional Convention which convened on the Fairbanks campus in November 1955.

Ernest Patty is also mentioned in these articles:

How Old is the University of Alaska?

History of the Presidents' Residence: Part 1, 2

The First Years at College, Part 1