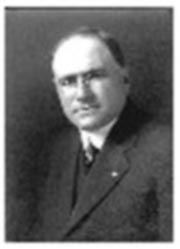 Leopold David was born in Brooklyn, New York in 1878. He served in the Philippines in the Spanish-American War, achieving the rank of Sergeant First Class. In 1904, he was assigned to Fort Egbert on the Yukon River near Eagle, Alaska, where he worked as a pharmacist's assistant for the Alaska Central Railroad . Discharged in 1905, he moved to Seward, obtaining a position as manager of the Seward Drug Company; studied law and passed the bar. Local newspapers ads described him as a "Physician and Surgeon". He later took up the law partnership with L.V. Ray of Seward in 1921. David ran the firm's Anchorage office.

In 1909, David moved to Susitna Station to serve as a United States Marshal. The next year, he moved to Knik, where he was appointed a U.S. Commissioner. He served as an ex-officio probate judge, studying law on his own time and gaining admission into the Washington State Bar Association. He married Anna Karasek in Seward. In 1915, David moved with his family to the tent city at Ship Creek; serving as U.S. Comminssioner.

Anchorage was legally incorporated on November 23, 1920. On November 29, the newly-elected city council designated Judge David, as he was known, as the first mayor of Anchorage, just six days after lengthy negotiations in which Anchorage residents voted to incorporate. He was elected for three consecutive one-year terms. After a second term as mayor, David served as a trustee of the Alaska Agricultural College and School of Mines from 1923 up until his death in 1924. Edward F Medley was appointed to finish his term.

David died on November 21, 1924 of heart failure. He was survived by his wife Anna and children Caroline and Leopold, Jr, and buried in Anchorage Memorial Park Cemetery.

Known and respected by all, he was the first honorary member of the Pioneers of Alaska Igloo No. 15. Anchorage got its start from his diligent and faithful service to the community. He was asked many times to run for territorial office, but declined on all occasions, preferring to serve the local community instead.