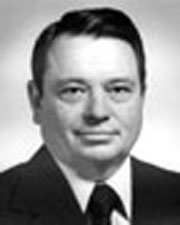 Dr. Charles O. Ferguson, The University of Alaska’s chancellor for southeastern Alaska, has been offered and has accepted the interim presidency of the state institution.

Ferguson’s appointment was effective February 24, 1977, the day after the Board of Regents had voted to offer him the interim presidency.  Following the vote, the regents met privately with Ferguson to determine if he were willing to accept the position under terms they had agreed upon.

“Dr. Ferguson is now the interim president of the University of Alaska,” Dr. Huge B. Fate, Jr., vice president of the board, announced upon the board’s reconvening its public session. The announcement was applauded by the audience.

Meeting with the press after the regents’ meeting, the 47 year-old Ferguson said he thought these were “reasonable” conditions. While he had not yet made any final decision on the matter, he said an interim chancellor would probably be designated to succeed him in Southeast.

“I’m pleasantly surprised and welcome the challenge,” said Ferguson of his appointment. “As interim president I will have the full authority of the president. I definitely will not be a caretaker.”

Because of his long familiarity with the university, he said he feels he will be able to take charge quickly.

“I feel I have a pretty good sensitivity… I want to get the team back together and make it work,” he said.

Ferguson said he anticipated taking up residence at Fairbanks within two weeks.

Married and the father of three children, Ferguson came to the university in 1968 to take the position with the former Division of Statewide Services on the Fairbanks campus. He rose to dean of the division and in 1972 was appointed provost for the university’s former Southeastern Region. Upon reorganization of the university in 1975, he was designated chancellor of the University of Alaska, Southeast.

He has a bachelor and master degrees from Northern Arizona University and a Doctor of Education from Wayne State University.

At the outset of their meeting, the regents voted to hire a three-member management team to advise them on the management of the university. The team, answerable to the board, will serve on a full-time basis until a permanent president is appointed.

In August of 1977, Ferguson resigned as President of the University of Alaska for newly appointed President Neil D. Humphrey.