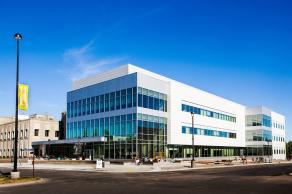 Dedicated to Margaret “Mardy” Murie, an alumna and esteemed conservationist, the Margaret Murie Building serves as the central home for the Department of Biology and Wildlife at the University of Alaska Fairbanks. Construction for the Murie Building began in March of 2011 and was completed in July of 2013. With no major modernizations to Life Sciences facilities at UAF since Bunnell was built in 1959, the building serves as a wonderful update to teaching and research space.

The Murie building is approximately 100,000 square feet of state-of-the-art laboratories, classrooms and office space featuring open, naturally lit areas and a 150-seat auditorium. Lab rooms were created with flexibility in mind, with movable tables and workbenches that allow the rooms to support any type of class, from biology to English to a public course on fly-tying. The building also sports several open spaces for students to gather and relax between classes including the M3 café on the main level.