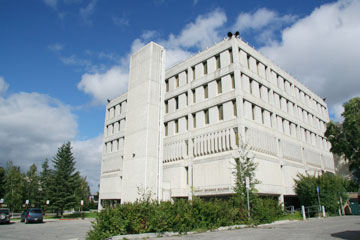 The Ernest Gruening Building, dedicated in May 1972, is an eight-story, 72,000-square-foot structure just north of the Eielson Building. It was the first building on campus more than three stories tall. It was built to house the social sciences, classrooms and general office space.

The Gruening Building was designed to resemble the FBI office building in Washington, D.C. In the late 1960s and early 1970s, planners believed university and other “establishment” buildings to be targets of civil unrest and built Gruening to withstand attack. It has no ledges or fixtures from which the building can be scaled from the outside.

The Gruening Building houses the College of Liberal Arts administrative center and the departments of Communication, English, Foreign Languages, History, Justice, Political Science, Psychology, Sociology and the Northern Studies Program. Gruening is also home to the School of Education and Student and Enrollment Services. There are also a number of classrooms in the building.

The building also contains the James E. Barrack carillon, donated in 1955 by Mrs. E. Barrack in memory of her late husband, a UA alumnus. In early 2004 the mechanism was moved to its present home in the basement of Gruening, and the mechanical clock apparatus was replaced with a modern digital console to control the operation of the hammers striking the tubular bells. From 8 a.m. to 6 p.m. Monday through Friday the carillon strikes the hour and quarter hours.