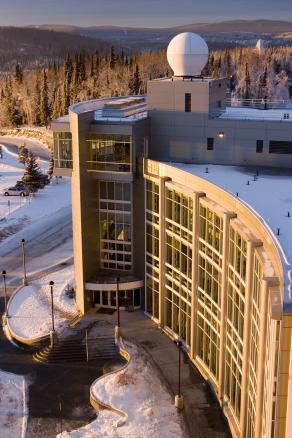 The five-story 100,000-square-foot Akasofu building sits on the northwest corner of the West Ridge. The building houses the International Arctic Research Center and other UAF departments as well as offices for the National Weather Service. When it opened in 1999, it relieved much of the overcrowding caused by the continual expansion of the Geophysical Institute in the Elvey Building, to which it is connected.

In May 1997, the governments of the United States and Japan, along with the state of Alaska, agreed to establish an International Arctic Research Center on the UAF campus as a project of the “Common Agenda,” approved by President Clinton and Japan’s Prime Minister Hashimoto. The U.S.-Japan Common Agenda proposed that both countries cooperate in research on and prediction of global climate change. This includes cooperation at research centers in Alaska and Hawaii. A cooperative agreement between the National Science Foundation and UAF’s IARC took effect in May 2000.

The research center’s primary goals are to study arctic climate change, the global consequences of those changes and to plan and carry out international cooperative arctic research of the highest possible quality. It also strives to fulfill the university’s mission of teaching, conducting research and offering public service. IARC serves as a focal point for international collaboration and provides the research community with an unprecedented opportunity to share knowledge about science in the Arctic. Scientists from around the world work to determine whether the changes in climate are due to natural or manmade causes. They also study the parameters, processes and interactions needed to understand and predict future climate change and its possible political and economic impacts.

The UA Board of Regents unanimously approved a proposal in December 2006 to name the building that houses IARC in honor of the center’s founder, Syun-Ichi Akasofu. A dedication ceremony took place April 27, 2007.

Syun-Ichi Akasofu is also mentioned in these articles: