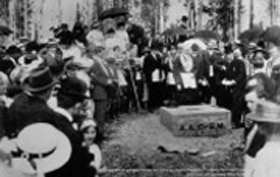 On July 4, 1915, Judge James Wickersham placed a cornerstone on vacant land where the Bunnell Building now stands at Alaska Agricultural College and School of Mines (University of Alaska Fairbanks).

Wickersham was facing strong opposition in the Alaska Territorial Legislature against the establishment of the Alaska Agricultural College and School of Mines in Fairbanks. Although there were no plans to attach the stone to a building, Wickersham wanted a physical location established before the Legislature convened. He had no legal right to dedicate anything, since the college didn’t exist, but Wickersham recognized the need for a symbol in those early years of the university.

Originally the stone had the word Cornerstone engraved above the A.A.C.-S.M., July 4, 1915. However, some of the letters broke before the dedication and were filled in with mortar. It may have been a disappointment, but Judge Wickersham reportedly said, “If they are smart enough to go to college, they’re smart enough to know it is a cornerstone!” 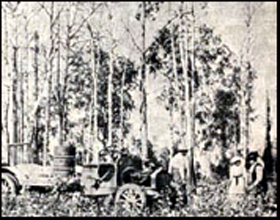 When Delegate Wickersham wired the Second Territorial Legislature, in session in Juneau, to approve his selection of the site, the legislature concurred and with that the congress voted favorably on his measure. President Wilson signed it into law on March 4, 1915. Wickersham returned to Fairbanks and with the help of several of his friends arranged for a ceremony, which was held on the Fourth of July.

Alaskans, with the exception of the Fairbanks business and civic leaders, were less than enthusiastic about establishing the college: the population was too small; Fairbanks was too remote; agricultural possibilities were negligible and mining had passed its heyday; Alaskan youth needed a change of scene after finishing high school and going to college “outside” was good for them.

Despite such arguments, legislators from the Fourth Division (interior Alaska) managed to put through a bill accepting the land grant offer by the federal government and provided $60,000 to build and staff the Alaska Agricultural College and School of Mines. Governor J.F.A. Strong signed the letter on May 3, 1917.

A Salute to Academic Tradition. University of Alaska Fairbanks, circa 1981