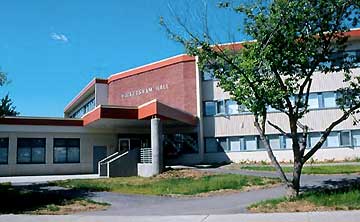 Wickersham Hall, built in 1957, accommodates 99 senior or graduate students in the center of campus south of Wood Center. The three-story complex has four-person suites in addition to single rooms. Originally an all-women’s dorm, it became coed by suite when renovated in the mid 1990s. Renovations included new furnishings, cable television and high-speed Internet access.

On Jan. 12, 1958, the hall was dedicated to Judge James A. Wickersham and his second wife, Grace. Both of them made important contributions to the development of the university.

During the 1967 flood in Fairbanks, when thousands of Fairbanksans were stranded on College Hill, Wickersham Hall was converted to an infirmary.

It was reopened for the Fall 1997 semester after extensive renovations. Now each co-ed floor has male and female shower facilities and is our only suite-style facility on campus and houses 98 students.