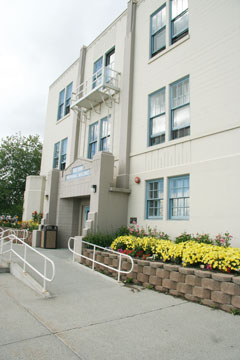 In the 1930s, aviation was one of Alaska’s fastest growing industries, and Fairbanks was at its center due to its desirable location for over-the-pole routes to Asia and Europe. The Eielson Building, originally intended to house a school of aeronautical engineering, complete with a wind tunnel and labs to test atmospheric conditions, was deemed a fitting tribute to Carl Ben Eielson, who was known as the “Arctic Lindbergh.” The Fairbanks chapter of the American Legion took on the job of raising funds to support the effort and about $25,000 was raised in private funds. Due to the Depression, only a fraction of the necessary funds for the Eielson Memorial Building were ever donated, forcing drastic cuts to be made to the building plans and the elimination of the aeronautical school.

The Alaska Agricultural College and School of Mines opened the Carl Ben Eielson Memorial Building in 1934 as a museum and as space for the music department. The original plan called for a three-story concrete building on the western part of the college’s central core, one of several planned identical concrete structures on campus to be decorated with a frieze of white quartz at the juncture of the first and second stories. The first floor of Eielson was completed in 1934 and covered with a temporary roof until it could be finished.

In 1935, Unit #5 was built just north of the original Eielson Building with a permanent concrete first floor and a temporary wood-frame structure on top. In the 1940s, the two buildings were joined using Unit #5’s concrete first floor as the north end of the ground floor of Eielson. Neither building was altered much. They retained their temporary wooden roofs, and Unit #5 became known as the north end of Eielson.

In 1950, the wooden second and third stories of both buildings were taken down and contiguous concrete stories were added in their place. This finally made Eielson look like one building. The wooden top of Unit #5 was placed to the west of Eielson and used as its own structure until 1970. In 1987, an addition was built that linked the Eielson Building and Signers' Hall, and both the building and the hall were made accessible to the disabled.

Over the years, the Eielson Building has also housed a dormitory, the college's administrative offices, the College Post Office, the bookstore, and several academic units of the college such as art, electrical engineering, physics, home economics and music. During the 1967 Fairbanks flood, the hall served as a preschool nursery for flood victims. It is currently home to the Graduate School and a number of other departments and offices.