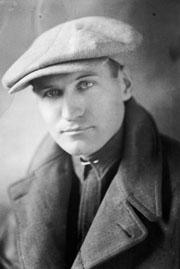 The following story was reprinted from the June 30, 1930 edition of Farthest North Collegian.

On November 9, 1929, Colonel Carl Ben Eielson, Alaska's pioneer aviator —companion of Sir Hubert Wilkins on journeys of exploration into both the Arctic and the Antarctic, crowned by the dash from Point Barrow to Spitzbergen which Admundsen called the greatest flight in the annals of aviation; a colonel with 14 decorations for service in aeronautics at the age of 32; winner of the Harmon trophy for 1928; an international hero —met his death while rescuing passengers and cargo from the ice-trapped ship Nanuk. His mechanic, Earl Borland, was killed at the same time.

On October 24 of 1929, Eielson announced that he had contracted with the Swenson Fur & Trading Company to bring 15 passengers and six tons of furs from the motorship Nanuk, caught in the ice of Cape North, Siberia, to Alaska. On October 28, Eielson and Borland were killed at the same time.

The first trip to Cape North, from Teller and return, was completed successfully by Eielson and Borland in the Hamilton and by Frank Dorbandt in the Stinson. Then ensued a period of bad weather, making flying impossible until the morning of November 9. On that date a dispatch was received from the Nanuk that the weather was clearing there, and it was decided to take off. 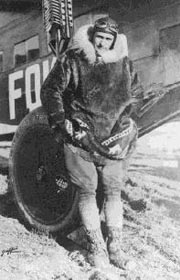 Carl Ben Eielson (1897-1929) is known as the Father of Alaska Aviation. Among his exploits were his exploration of the North Pole and his first successful flight over the North Pole.

Dorbandt, flying a slower ship, was the first to leave. He never saw Eielson alive again. Far out over Bering Strait Dorbandt encountered enormous banks of heavy fog and was forced to turn back to Teller. Eielson and Borland pushed on, fighting their way through storm and fog, until they reached a point near Cape Wankarem.

Here, for some reason that will never be known, the Hamilton crashed, and Eielson and Borland were instantly killed. The weather was undoubtedly stormy and it may have been that the plane's wing dipped too close to the ground in a bank being made preparatory to landing; or it may have been that the altimeter, which registered 1,000 feet when found, had ceased functioning and misled the fliers.

With the finding of the bodies and the growing sentiment in Alaska, the idea of a permanent Alaskan memorial to Alaska's pioneer aviator began to crystallize. Dorman H. Baker Post No. 11, The American Legion, Fairbanks, Alaska, whose flag Eielson had carried on his epochal flight over the "top of the world," made the original suggestion. It was speedily taken up by the local Commercial Club, which called a joint meeting of representatives of each fraternal and civic organization in the city; in all, 14 in number.

The purpose of this first meeting was to organize an Eielson Memorial Committee pro tem and to make suggestions for a really appropriate Eielson memorial. Mr. Murray C. Smith was elected chairman. Andrew Nerland, vice-chairman and M.O. Carlson, secretary-treasurer. Suggestions for an Eielson Memorial submitted at this and following meetings, included the following:A playground for children, to be located in the town of Fairbanks

While all the above proposals were seriously considered, none of them secured the agreement of the Committee.

Just at the time when prospects for an Alaskan Eielson memorial seemed the blackest, Ralph R. Reeser, Commander of the local post of the American Legion and an indefatigable public worker, came forward with the suggestion that the committee support a project to erect upon the campus of the Agricultural College and School of Mines (situated three miles from Fairbanks at College, Alaska) a concrete, fireproof building to be known as the Colonel Carl Ben Eielson Building of Aeronautical Engineering, at an estimated cost of $100,000.

The project was carefully considered from all angles and it soon became apparent that an idea had been hit upon which met with the approval of all. The Committee realized that if a project of any magnitude were to be assumed, the one adopted would have to present an appeal to the popular mind in addition to being intrinsically sound. This newest idea seemed to comply with all requirements, and when the proposal came to the vote it was passed enthusiastically. Having decided upon a worth-while project, the Committee next considered plans for its consummation. At the earnest request of the Committee, Dorman H. Baker Post No. 11 accepted the project and agreed to do all in its power to push it it to a successful conclusion.

The 1934 ground breaking ceremony of the Eielson Building. James Wickersham digs the first shovel full of dirt. Due to the depression only a fraction of the necessary funds were donated.

A considerable amount of personal solicitation will be done in both Alaska and the United States. From all indications a real showing towards the hundred thousand is going to be made right here in Alaska. Dr. Charles E. Bunnell, President of the Alaska College, became the first donor to the Fund with a check for $1000, and, new as the project is, contributions are already beginning to come in from various parts of the territory. Alaskans realize the significance of this project, and their generous support is assured. It is hoped that every man, woman, and child in the Territory will be given an opportunity to share in this glorious undertaking.

The Colonel Carl Ben Eielson Building of Aeronautical Engineering will be a three-story, concrete structure, 54 feet by 84 feet in size and will be located on the College campus some 200 feet due south of the girls' dormitory. A sign has been erected upon the site selected for the building. 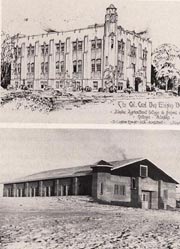 The original plans for the building contrasted with the first floor as actually constructed in 1934. Photo: UAF Archives, Bunnell Collection

Ben Eielson is truly deserving of this, a living, useful, appropriate memorial. Not only was he great in the realms of aviation and exploration but he possessed those other qualities of devotion and manhood which endeared him to members of his own family and established him firmly in the hearts of those with whom he came in contact. His courage, his love for his fellow man, his loyalty, his sincerity of purpose and his great accomplishments will for all time be an inspiration to the youth of the world.

This building - which at one time or another housed virtually every department on campus was not finished until 1950. Photo by Todd Paris