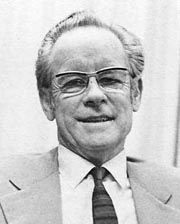 Eugene Short, the former director of Anchorage Community College, expanded the services of the college

A personal remembrance hour will be at 12:30 p.m. Sunday at Anchorage Unitarian Universalist Fellowship. A memorial service will be held at 7 p.m. Tuesday at Loussac Library's Wilda Marston auditorium. There will also be a memorial service in Stockton, Calif.

Mr. Short was born Dec. 17, 1916, in San Francisco. He earned a bachelor’s degree from the College of the Pacific in Stockton, a master’s degree from Stanford University in Palo Alto, Calif., and an honorary doctorate of education from the University of Alaska.

The community college, under Mr. Short, attracted many adult students, including those seeking a high school diploma. Innovative programs were encouraged by Mr. Short, and when the University of Alaska rejected his proposal for a program in nursing, he established the program through the University of Washington.

After several years of successful operation, this program was accepted by the University of Alaska and Anchorage Independent School District, which were the forces behind the community college.

Some of the programs Mr. Short built were in electronics, welding, aviation, dental assisting, practical and registered nursing, and faculty and programs in the humanities, social sciences, business and office administration.

Grants for adult basic education, village school board education training and to establish a criminal justice center as well as programs to work with alcoholism, ageism and a pretrial bail services for the Alaska court system were received in the millions of dollars.

He eventually became dean of the community college and also served briefly as acting provost.

He then put his hobby as a bibliophile to work by opening the Alaskana antiquarian bookshop, specializing in books about Alaska, the Arctic and Pacific Northwest. He became the only Alaska antiquarian book appraiser and was acknowledge throughout the book world. He sold the bookshop effective Jan. 1, 2000.

Mr. Short was a member of the Unitarian Universalist Church, Salvation Army Advisory Board, Midtown Rotary and Retired teachers. He was past chairman and lifetime member of the Salvation Army Advisory Board and received the prestigious Salvation Army’s “Others” award. He was past president of the Anchorage Symphony Board; past president of the national Community College Administrators Association; was given an honorary doctorate by the University of Alaska; and was honored by his name being given to the former community college administration building.

In 1971, Gov. Bill Egan appointed him to the State Manpower Planning Council. He initiated special relationships with community organizations and affiliated them and their programs with the college, among them Alaska Festival of Music, Anchorage Weavers Guild; Aleut basket-weaving workshops; and creative craft workshops. In cooperation with Channel 11, the college inaugurated television programs and offered credit for completion under the national Sunrise Educational Programs.

In the 1960s, in cooperation with the Anchorage School District, high school seniors were permitted to enroll for two college courses during their last year of high school.

He sponsored a yearly Arts Fair on the college campus which attracted many Alaskans statewide.

“He was a great man and a true friend; he dedicated his life to educating others and enriching their lives,” his family said.

He was preceded in death in 1965 by his first wife, Jessie. He is survived by his current wife, Sylvia L. Short of Anchorage; daughter, Jacquie Fonzi of Stockton; and stepson John Vineyard of San Jose, Calif.; and four grandchildren; and seven great-grandchildren.

Memorial donations may be sent to Habitat for Humanity, Sloan-Kettering Cancer Society or KAKM.

Eugene Short is also mentioned in these other articles: