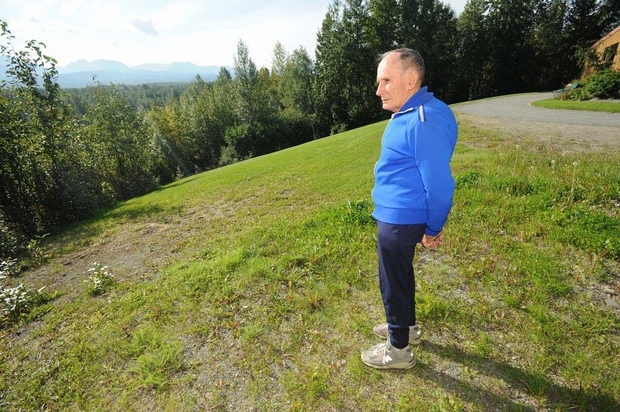 Jim Mahaffey, 80, stands at the site of the former ski hill at Alaska Methodist University. The area now sits in the backyard of the Mlakar President's Home of Alaska Pacific University. Mahaffey has been integral to the development of cross-country skiing in Alaska, and to the Tuesday Night Race Series, which kicks off tonight. Photo: Erik Hill, Anchorage Daily News

Mahaffey, 80, loves all things skiing and has done more for the sport than anybody in Anchorage, maybe more than anybody in Alaska. His career here spans 60 years and covers the entire state. He has worked with all levels of skiers, young and old, beginners and Olympians.

When Mahaffey arrived in Alaska, cross-country skiing was a fledgling sport at best. Now it's everywhere. He created the cross-country ski team at UAF and the intercollegiate program at Alaska Methodist University (now Alaska Pacific University) in Anchorage. He built ski trails around the state, including the ones at APU that bear his name, and helped with the construction of Olympic ski trails across the globe. He coached the first women's varsity college ski team in the country. He helped athletes become Olympians.

His reach extends even beyond skiing. He started the Tuesday Night Race Series in Anchorage as a training tool for his AMU team. And while in Fairbanks, he helped create the Equinox Marathon and worked to get UAF's Patty Center built.

"Very few people have done what Jim has done for skiing," said Dick Mize, another of the city's nordic skiing pioneers and the namesake of Kincaid Park's Mize Loop.

'WHAT ARE THOSE SKINNY SKIS?'

Mahaffey grew up in the mountains of Pennsylvania with an athletic father who played basketball and baseball and passed those sports on to his son.

"I never really cared for (them) much," Mahaffey said. "But then I discovered skiing, and that was it."

He started skiing when he was 5 and started training seriously when he came to Elmendorf Air Force Base in 1950, after joining the Air Force. He competed in his first races at the Spring Armed Forces Ski Championships, which features skiers from Alaska military installations.

"I learned to ski and race simultaneously," Mahaffey said. "We trained daily. It was a tremendous amount of skiing."

After his time in the Air Force, Mahaffey enrolled at Western State College in Gunnison, Colo. There, he competed on a team coached by the legendary Sven Wiik and was a member of the school's NCAA championship team in 1956, the same year Mahaffey won the first biathlon race held in the United States.

Back then, about the only place you could find cross-country skiers in this country was at colleges. Mahaffey got curious looks one day when he pulled into a Colorado gas station with nordic skis on the roof of his car.

"Somebody came up to me and asked, 'What are those skinny skis?' " he said.

After one season as an assistant coach, Mahaffey received two job offers. One came from UAF, to be an assistant professor and ski coach. The other came from the Peace Corps, to teach jungle survival in Puerto Rico.

"Puerto Rico would have been an experience, but I decided it was time to get an honest living," he said.

FROM THE GROUND UP

Mahaffey arrived at UAF determined to strengthen the ski program, which at that point featured only an alpine squad. He brought coaching habits learned from Wiik, who came to the United States from Sweden.

"It was tough," said Robert Macaulay, who skied for Mahaffey at UAF. "He pushed you beyond what you thought you could do."

Mahaffey didn't say much when he coached, Macaulay said, but his words packed power. And it wasn't just his athletes who listened. Macaulay remembers other coaches sneaking a listen to what Mahaffey had to say.

Besides bringing cross-country skiing to UAF, Mahaffey helped create the Equinox Marathon, held annually on the third Saturday of September. Although skiing has always been Mahaffey's specialty, he was an avid runner at a time in Alaska when running wasn't popular.

"I was running down the road one day when somebody pulled alongside of me and asked if I needed a ride," Mahaffey said. "He couldn't believe that somebody was running just to be running."

In 1967, Mahaffey took a one-year leave of absence from UAF to coach at Alaska Methodist University.

"There were no facilities at AMU," he said. "I had to start from scratch at AMU."

First, he needed some trails. Creating a ski trail today takes lots of money and fighting through red tape, but in the 1960s and 1970s, things were much simpler.

"We would ski the terrain and flag it in the winter," said Mahaffey. "In the summer, we would go and make any necessary changes."

With his trails in place, Mahaffey built his team. After five years, it was a national powerhouse.

"My team was the best in the country," he said.

Besides skiing circles around the competition, AMU was making history. The school featured the only varsity women's cross-country ski program in the nation, which afforded Mahaffey the best talent in the nation. Two women from AMU were on the 1972 U.S. Winter Olympic team in Sapporo, Japan.

"For women to have a program, it was huge," said Alison Bradley, who, as Alison Owen, was one of Mahaffey's biggest stars. "We had the best women in the Northwest."

One of six Olympic skiers that Mahaffey helped produce over the years, Bradley credits her success to Mahaffey's work ethic.

"He brought the best out in you. He made you want to excel,'' she said. "Jim made it fun, but serious fun."

A SPORT TAKES OFF

Even while he was turning out Olympic skiers, Mahaffey still enjoyed running. Every Tuesday, he organized a 10-kilometer training run for his ski team.

Other people heard about the weekly structured runs and started showing up too. The municipality of Anchorage took over the weekly races and turned it into the Tuesday Night Race Series, which, 35 years later, draws hundreds of competitors every week from early September until early November. This year's series begins tonight at Kincaid Park.

After his days at Alaska Methodist, Mahaffey offered his service to Bush Alaska, where he trained new skiers and new coaches.

"I showed them how to put on a ski meet," he said.

Meanwhile, the sport kept growing in Anchorage, becoming a high school sport with huge participation numbers, then spreading across the city, Mahaffey said.

Mahaffey doesn't run much any more: He calls himself a "fair-weather alpine skier." He hasn't raced in nearly five years. But nordic skiing still holds a special place in his heart.

Mahaffey is a member of Western State College's Hall of Fame as a skier, and next month he will be honored by the school again, this time with a lifetime athletic achievement award.

But maybe the best tribute to Mahaffey is one of the wall hangings at his home. Above his piano is a small wooden plaque. In the middle is a picture of Mahaffey and his wife, Dee, on a ski trail on a sunny winter day.

Mahaffey Urges Proper Use of Trails