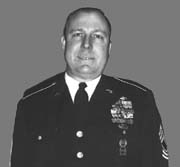 E.F. Horton during his coaching days.

The University of Alaska Fairbanks has sponsored a rifle team since 1937. With the completion of the Patty Athletic Center in 1962, UAF began a tradition of rifle excellence that continues today. Dr. William Wood, the university's president and an athletic booster, recruited the team's first modern coach, Master Sgt. E.F. Horton, from Kansas, with the assistance of the Army ROTC. Horton quickly developed a reputation as a keen eye for potential and as an enthusiastic coach.

Horton's tenure saw the domination in the 1960s of the UAF Rifle Women's Team, which won the NRA National Collegiate Women's Championship from 1961-67.

In 1980, rifle was reorganized into an NCAA-recognized and sponsored sport. The official program included smallbore 3-Position (40 shots in each of prone, stand, and kneel) and air rifle (40 shots standing). Following other NCAA sport guidelines, a shoulder to shoulder national individual and team match with a qualifying procedure was established.