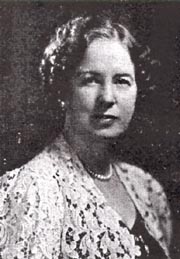 Dedicating the lecture hall, in the Natural Sciences Facility, in honor of Pearl Berry Boyd recognizes her foresight and generosity. Pearl Berry Boyd's gift was among the pioneering private gifts and signifies changing times and the increased importance of the private sector in making the difference in public universities.

Pearl Berry Boyd was born in 1890 in Selma, Calif. As a young woman, she walked, boated and traveled by dog sled in the Yukon, climbing the notorious Chilkoot Pass. A patron of the arts, Mrs. Boyd was an accomplished pianist and singer and a benefactor to the Los Angeles Symphony Orchestra. She was the matriarch of the Berry family, which is engaged in gold mining in Alaska and oil production in California. Her family contributed the original gold collection to the University of Alaska Museum of the North.

Ester, Alaska, was called Berry when it was established in 1906, in honor of Clarence J. Berry (Pearl's uncle) and his brothers, early gold miners in the Fairbanks and Circle mining districts of Alaska and the Yukon.