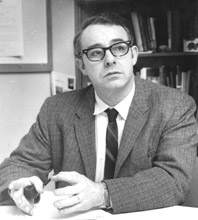 This article first appeared in the February 1982 issue of "Now in the North." By Steve Lay

Nearly 30 years after T. Neil Davis was accidentally hired by the Geophysical Institute, he wound up his long and distinguished career at the University of Alaska when he retired in December.

Davis, a former high school dropout, is a professor of geophysics and author of the popular newspaper column "Alaska Science Forum." His initial tentative relationship with the University of Alaska began when he was hired as a college freshman to carry distilled water from the physical plant to the Chapman Building for the Geophysical Institute.

A geophysics major, Davis graduated with a bachelor's of science in 1955 and then left Alaska for graduate work at the California Institute of Technology. He earned a master's degree two years later and returned to the Geophysical Institute as a staff member. "Actually, my coming back to Alaska was somewhat of a mistake. Dr. Elvey thought I had completed my Ph.D. at Cal Tech when he offered me the job. He was a little shaken, needless to say, when I arrived and he realized that I wasn't quite at the level he thought I was," Davis said. Davis completed his doctorate in 1961.

As an undergraduate Davis had worked with Elvey, then Geophysical Institute director. They designed the Elvey-Davis all-sky camera. Over 100 of these instruments were later used throughout the world to monitor the aurora during the International Geophysical Year. Davis was responsible for 10 of the cameras in Alaska.

With the exception of a three-year stint with the National Aeronautics and Space Administration (NASA), Davis' working years have been spent at the Institute, where he authored more than 100 professional papers and reports, worked with graduate students and continued his research. He as been involved in many scientific projects, most of them related to the aurora. The early work with all-sky cameras led Davis to recognize the potential of low-level light cameras for recording the aurora.

He pioneered the technology and application of television cameras in such research and his knowlege of their use in auroral studies led to his greatest scientific experience.

The aurora is a low-level light source. Recording it on film is difficult because of the long exposure time required. The resulting blurred image can't isolate the action. But television cameras can record the aurora at the same speed it occurs, enabling scientists to study its rapid fluctuations.

In the mid-1960s, it was suggested that by firing an electron gun into the ionosphere from a rocket, an artificial aurora could be created, although it would be quite weak. The scientific community was divided on the concept. Many felt it was impossible, but Davis was interested in the idea and he became the principal investigator for observation and instrumentation of the first attempt to create an artificial aurora.

After several years of planning and preparation, the rocket was fired from Wallops Island, Maryland in January 1969. Numerous delays had postponed the launch until the last few minutes of the last possible day for the experiment.
Larry Sweet, a member of Davis' observation team, remembers the night.
"When the rocket was fired, it went completely off course. Instead of going south, it headed almost due east. We could see three years of work gone with nothing to show for it. All our practice for recording the firing had assumed the rocket would go south. We just tried to guess where the rocket was headed, aimed the camera that way and hoped for the best."

Standard procedure was to destroy an off-course rocket and in the control room, the assistant safety officer started to hit the destruct button. Seeing the rocket was heading out to sea and not endangering anyone, the senior safety officer covered the buttons with his hands to save the rocket. Three low-level cameras were to record the experiment.

"About 6 a.m., after the launch was completed, everyone assembled in Neil's motel room to watch the video tapes to see if we'd managed to catch anything," Sweet said. The tapes from two of the cameras yielded nothing, so the crew called it a night and headed for bed. The next morning everyone but Davis left to pack up their gear. Davis put on the final tape—the one shot by Sweet and teammate Neal Brown by "guess and gut feeling."

"I was sitting there feeling dejected and morose playing the tape through. After two or three minutes, I suddenly saw the aurora. Without question, that was the most exciting moment I've ever experienced in my scientific life," said Davis.
"Suddenly everything had turned around. Within a few minutes I detected several other auroras." A decade hasn't dimmed the excitement of the event for Davis. "It was doubly good because so many people had said that it couldn't work," he said.

T. Neil Davis is also mentioned in these other articles:

Join Neil and interviewer Robert Hannon to hear the story this teacher, leader, writer and scientist has to tell. An Evening with Neil Davis