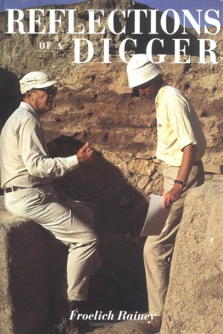 The nation's economy was crashing all about him in 1929 when Froelich Gladstone Rainey boarded a commercial steamer in San Francisco to seek a wealth of experiences that he was sure would be useful for his first great American novel.

He got the experiences, and they read like an adventure novel: selling 10- gallon tins of kerosene along roadsides in the Philippines, spending a night in a Cairo jail for carrying a gun, being stranded penniless in Shanghai during the Depression and supporting himself for a time as a Monte Carlo gambler. But he never turned them into fiction.

Instead, fate led him on a circuitous road to fame as an anthropologist and archaeologist, noted for unearthing or participating in the finds of historically significant civilizations around the world. Most of the discoveries occurred while he was director of the University Museum at 33d and Spruce Streets from 1947 to 1977.

Dr. Rainey, 85, who never let any moss collect under his walking shoes, died of cancer Sunday in Cornwall, England, his home since retiring from the museum.

"There was nothing stuff-shirt about Frol Rainey," said a former University Museum associate, John Cotter. "He met millionaires and penniless students with the same courtesy."

Mrs. Jacqueline Kennedy greets officers of the American Association of Museum Directors as they arrive for tea at the White House. Dr. Froelich Rainey, president, is next in line to shake Mrs. Kennedy's hand. June 5, 1962.

The life of Frol Rainey, as his friends called him, was filled with more adventures and plot twists than an Indiana Jones movie. He was born on a Montana cattle farm, where he grew up with a pistol on his hip and a lariat in his hand, according to his recently published autobiography. He seemed destined to become a cowboy, like his father. But it soon became apparent that his wit was quicker than his draw - and deeper than his desire to stay on the ranch - and off he went to the University of Chicago. There he began thinking he had a novel in him.

"The idea of becoming an anthropologist had not occurred to me. I had it all figured out that I was the writer the world had been waiting for. So, off I sailed to get the background to fulfill my destiny," Dr. Rainey told an Inquirer reporter shortly after accepting the directorship at the University Museum.

He was 20 years old when he set sail. By the time he had worked himself around the world, in about a year, he had test-driven some of the earliest automobiles produced in Europe and learned to fly.

He returned to the Philippines to teach and later attended the American School in France. While there, he did some volunteer excavation in European caves, but still was not thinking of making it a career.

"I have never been a dedicated scholar and dislike the label 'intellectual,' " he wrote in his autobiography. He was set to start Army flying school when Yale graduate school offered him a scholarship, so he veered onto this untraveled path.

He obtained his doctorate in 1935 and directed a dig in Puerto Rico. Then he headed off to take a faculty position at the University of Alaska-Fairbanks and spent his summer breaks in a frigid corner of northern Alaska searching for the origin of the Eskimos who live above the Arctic Circle. He lived among the Tiagra Eskimos from 1935 to 1942, observing their culture, sharing their meals of raw whale meat and living in their ice houses. Once, when his boat collapsed on the Arctic Ocean, he walked back to town across ice floes.

In 1942, during World War II, the federal government assigned him to work with the Board of Economic Welfare to plan food production in the Western Pacific. But his most memorable assignment was directing the hijacking of malaria-fighting tree bark in Ecuador headed for the Nazi army. His job was to get all the bark, then the only way to make quinine, for U.S. troops fighting in the Pacific, he wrote in his book.

After the war, he heard that the University Museum was looking for a director. Dr. Rainey, then only 37 but already a seasoned anthropologist, got the job.

Still, his government work apparently did not stop, at least not immediately. In the early 1950s, he helped infiltrate U.S. spies into Afghanistan as part of a University Museum dig. He quickly ended his association with the CIA after that, he wrote in his book.

His stature among anthropologists grew with each successful find. After building up the archaeology staff at the University Museum, he turned his attention to filling the institution with artifacts that drew considerable notice during exhibitions. This was before foreign governments forbade artifacts from being taken out of their countries and before museum-quality pieces became nearly priceless.

Dr. Rainey discovered that not only were his artifacts getting the attention of other professionals, but also that ordinary citizens were very interested in archaeological treasures. In 1949, he created a television show called What in the World, in which a panel of experts tried to guess the use and origin of artifacts. The popular program, which aired for 15 years on WCAU-TV (Channel 10), was carried nationally five years and inspired similar shows in other countries, according to a Philadelphia Daily News review of Dr. Rainey's book.

Dr. Rainey is survived by his wife, Marina; daughter, Penelope; two grandchildren, and a sister. A funeral will be held Thursday in Cornwall, England.

ARCTIC article on Dr. Rainey after his death.

Youtube clips from What In the World and the history of the Museum of Archaeology and Anthropology can be viewed here.