This profile of former U.S. Sen. Bob Bartlett appeared in the Aug. 13, 2003 issue of the Fairbanks Daily News-Miner. By Sam Bisshop

WASHINGTON—In one of Bob Bartlett's many election campaigns, an opponent once tried to gain advantage by repeatedly referring to the longtime Alaskan as "Seattle-born. " The charge was true, but inaccurate.

Born in Seattle on April 20, 1904, the young Bartlett was back in Fairbanks within a year and spent much of his childhood and early adulthood in town. Eventually, his successful political career let Fairbanks lay claim to having produced one of Alaska's first two United States senators.

Today, the average person in the senator's home town is unaware of Bartlett, according to his daughter Doris Ann Bartlett, who lives in Salcha and teaches literature at the University of Alaska Fairbanks. But there was a time when most people in Fairbanks had either heard of or, more likely, personally knew Sen. E.L. "Bob" Bartlett.

"He was just very interested in everybody. He had an enormous number of friends," his daughter recalled. Bartlett's father, Ed, came from Texas to run packhorse trains in the Klondike country during the gold rush.

Bartlett's given name was Edward Lewis, but his sister Doris insisted upon calling her younger brother "Bob," and it stuck for life, UAF history professor Claus M. Naske reported in his 1979 book, "Bob Bartlett of Alaska."

After graduating from high school, Bartlett tried college both Outside and at UAF's original college, but found himself drawn back to reporting for the Fairbanks Daily News-Miner. He worked for the paper from 1924 through 1933.

He married his childhood friend and high school companion, Vide Gaustad, in 1930 after a long courtship. She, too, was the daughter of a miner—O.P Gaustad, a former newspaperman who was politically active. So the Bartletts' wedding in Valdez was witnessed by territorial Sen. Anthony Dimond. Between the Bartlett's newspaper work and his connection to the Gaustads, politics soon came calling. Alaskans elected Dimond in 1932 as the territory's nonvoting delegate in Congress. Bartlett applied for a job in D.C. and got it.

Dimond lasted 12 years in Washington, but not the Bartletts. Within two years, they returned to Juneau, where Bob took a few political appointments. However, his father died in 1935, so the family returned to Fairbanks to help run the latest mining venture—a placer claim on Independence Creek near Circle Hot Springs.

Bartlett didn't like mining much, though, Naske reported. So after the 1938 season, he looked again to the political arena. Within a few months, he was appointed Secretary of Alaska after the incumbent died. At that time, such appointments were made by the Department of Interior, which administered territories.

In 1944, Dimond planned to return to Alaska and Democrats pushed Bartlett to seek the delegate job. As with most of his career decisions, Bartlett was indecisive and almost backed out at the last moment, Naske wrote.

During his first campaign speech, Bartlett endorsed the cause for which he is most remembered: statehood for Alaska. He won the race handily, and did the same with every subsequent election until 1952. That year, airline owner Bob Reeve challenged Bartlett as a Republican.

Bartlett and Reeve scheduled a debate, in the rather odd location of Wasilla. After beating Reeve with 57 percent of the vote, Bartlett went back to Washington and continued his battle for statehood, finally succeeding in 1958.

"He was of course responsible for statehood—there is no question about it in my mind," said Fairbanks attorney Mary Nordale. It was Bartlett who finally reeled in House Speaker Sam Rayburn and Senate Majority Leader Lyndon Johnson, she said.

Other prominent Alaskans, of course, were deeply involved, including Interior Department attorney Ted Stevens, now Alaska's senior senator. In a history of the Alaska Native land claims settlement, Anchorage attorney Don Mitchell quotes statements Stevens has made indicating that he used the Interior Department offices to lobby for statehood, knowing it was illegal. Bartlett figured as much. After Bartlett talked with Stevens in early 1958, Mitchell reported, Bartlett wrote in a letter to a friend that "at a guess I should say that many taxpayers' dollars are used for telephone calls to the Interior Department from Alaska and vice versa on matters more political than executive."

With the statehood bill signed by President Dwight Eisenhower by mid-1958, Bartlett quickly turned to a campaign for the new U.S. Senate seat. He won with 83 percent of the vote. Gruening also won, by a much narrower margin.

Bartlett won the coin toss to determine who would be the state's "senior" senator, but another coin toss gave him the two-year term so he had to run again in 1960 while Gruening could wait until 1962. Bartlett was re-elected handily in 1960 and in 1966.

Bartlett died in Cleveland, Ohio, on Dec. 11, 1968, the very day that President Richard Nixon appointed then-Gov. Wally Hickel as his secretary of the Interior. Hickel, before he left the governor's office, appointed Republican Stevens to Democrat Bartlett's empty seat. Stevens' appointment took advantage of a change in law he and other Republicans had recently pushed through the Legislature that allowed the governor to appoint a senator from either political party.

Bartlett was buried at Northern Lights Memorial Park in Fairbanks. 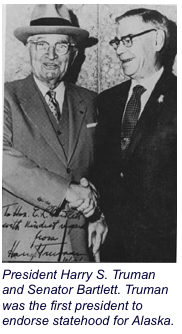 Pictures: Unless otherwise noted all photographs are from the book "Bob Bartlett of Alaska" by Clause M. Naske, 1976, University of Alaska Press