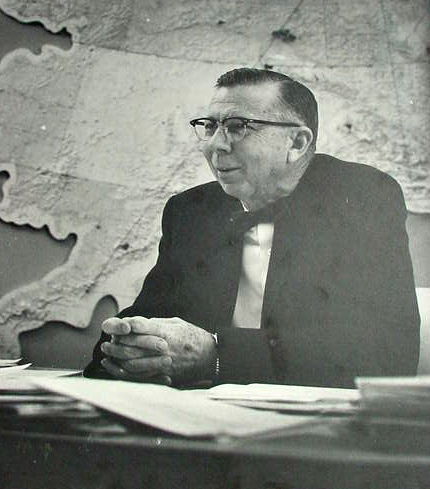 Christian Thomas. Elvey was born on April 1, 1899 in Phoenix, Arizona. He graduated with a Bachelor of Arts in Physics and Astronomy from the University of Kansas in 1921 and graduated with his masters in 1923. Elvey competed a Ph.D. in astrophysics at the University of Chicago in 1930. He subsequently held posts in the Yerkes Observatory, Northwester University, and the McDonald Observatory where he was Astronomer-in-Charge. His numerous publications in astrophysics were chiefly concerned with stellar and nebular spectra. With O. Struve he developed the method for obtaining rotations of stars from profiles of absorption lines, and in the late 1930’s Struve, Van Biesbroeck and he were responsible for introducing the 150-foot nebular spectrograph of the McDonald Observatory, which provided the first information on the distribution and quantity of hydrogen in the Milky way.

It was also during this period with the observatories, at a time when few others were concerned with the that Dr. Elvey became interested in the light of the night sky and applied photo-electric techniques to the detection and photometry of the gegenschein and the color of the zodiacal light. Later, in conjunction with Frank E. Roach, he carried out the first thorough photometric investigation of the light of the night sky. This interest in the night sky was instrumental, after the war, in bringing him to Alaska.

During the war years and immediately following, he worked in applied research on the internal ballistics of rockets at the California Institute of Technology and, later on propellants and high explosives at the U.S. Naval Ordnance Test Station at China Lake.

Dr. Elvey moved to Alaska in 1952 to become Head of the Department of Geophysics and Director of the Geophysical Institute. He personally undertook a study of the morphology of the aurora, contributed to the design of an all-sky camera for the IGY, and formulated a unifying policy for the Institute based on the theme of ‘particle bombardment of the atmosphere.’

At the administrative level he was successful in winning the confidence and support of the electronics research Directorate of AFCRL, which greatly strengthened the financial position of the Institute during the 1950’s. He secured major funding for the IGY program from the National Science Foundation, and there is little doubt that the consequent output of geophysical research during and following the IGY did much to focus favorable attention on the Institute and Alaska, both in the United States and abroad. To name just one other item: His research proposal of 1958 for the investigation of solar-induced phenomena at magnetically conjugate points, a study subsequently financed by AFCRL, proved to be a far-sighted suggestion which gave the Institute a useful lead in that field.

In the wider sphere, Dr. Elvey is well known as a member of many U.S. and international scientific organizations, and has been prominent in the affairs of the IGY and the IQSY. Until 1962 he was Chairman of the Aurora and Airglow Committee of the IUGG. He is a member of the Scientific Advisory Board of the U.S. Air Force.
Elvey directed the University of Alaska Geophysical Institute from 1952 to 1963, a period during which the Institute attained word-wide fame and prestige. Later he served as the university’s first vice president for Research and Advance Study in 1961, then as University Research Professor and assisted with the President. He retired in 1967.

On May 19, 1969 Elvey was awarded an Honorary Degree of Doctor of Science from the University of Alaska for his scientific achievements.

Christian T. Elvey is also mention mentioned in these other articles: