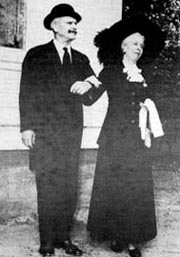 Arthur W. Loftus, one of the first six students at the Alaska Agricultural College and School of Mines, died October 6 in Portland, Oregon of cancer. He was 85.

Arthur’s wife, Dorothy, was also among the half dozen students to register at the college on September 18, 1922, the day it opened.

Arthur’s brothers, Ted and Jule, also attended the college during its first year. Ted is still living in Woodburn, Oregon.

Mr. Loftus was born July 21, 1897 in Tomahawk, Wisconsin and moved to Fairbanks at the age of 18. He and Dorothy moved to Oregon in 1949 and they’ve lived at Coos Bay ever since. He built the house they lived in right on the beach.

They have four children: Don, Ann, John, and Ted, all of whom live in Oregon, except John, who lives in Minnesota.

Arthur Loftus is also mentioned in these articles

Excerpt from "My Life Story"