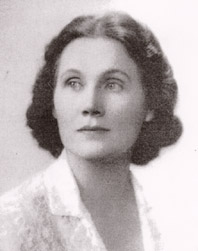 It was only a few years after the "gold strike" in Alaska when an adventuresome young lady from Council Bluffs, Iowa, visited her brother Bill Campbell in the "Last Frontier."

Born in Council Bluffs, Iowa, Ruth was the daughter of Scottish parents Alexander and Mary Ann McKenzie Campbell. After completing her education in Iowa and Nebraska, she entered the Red Cross service during World War I as a canteen worker in 1918.

At 25 years of age in 1919, en route to Fairbanks, Ruth Campbell endured the hardships of weather, primitive transportation and lodging as she traveled by boat, railroad and foot. During many parts of her trip she was the only woman in the group. She was going to visit her oldest brother, who had been a miner from the early days of Dawson. On the steamship to Alaska she met a fellow passenger, James Barrack, the owner of Samson Hardware Company in Fairbanks. 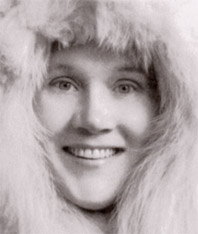 Portrait of Ruth Barrack in fur parka during the 1940s.

Eventually she arrived in Fairbanks, and that fall, accompanied by a pioneer photographer, Mrs. Nan Robertson, left by steamer for the Kantishna to take pictures of Mt. McKinley. After 10 days on the river, they crossed the 30-mile trail to the Quigley mine spending the next two months with the famous Joe and Fannie Quigley, of whom a number of books have been written. Ruth then went by dog team through the same pass and route that the now Mt. McKinley Park road follows. Ruth returned to Seattle, taking 28 days to make the trip.

Fannie was purportedly fascinated by Ruth—this very genteel, civilized lady—but wanted no part of either! In the years following, Fannie would often come to see Ruth on visits to Fairbanks. She would arrive unannounced and bang on the front door, never using the door bell, and yell, "Kid, where the hell are you?" Dressed in men's clothing she looked rather witch-like and scared Ruth's daughters to death. Years later a friend recalled, "whenever there was a terrible commotion at the front door - it was a signal that 'Fannie is in town!'

In January 1921, she married James E. Barrack, who was interested in many business ventures, helping to promote many "firsts" in the Interior. 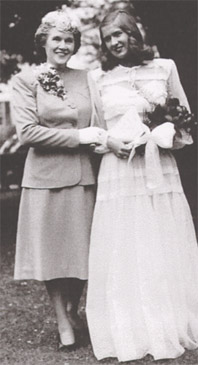 Ruth with her daughter, Bonnie, at graduation from Massachusetts boarding school in 1945.

Mrs. Barrack lived in Fairbanks in the true pioneer tradition. She and her husband helped the city grow and have been active in all charitable drives and organizations.

There isn't any organization in Fairbanks Mrs. Barrack hasn't either helped organize or served in its development. Besides being a member of the Alaska National Bank Board from 1960-1970, she was on the board of the Borough Library, as the auditorium of the Noel Wien Memorial Library was named in her honor, the State Board of the American Cancer Society and on the Board of Trustees of Alaska Methodist University in Anchorage.

Perhaps Mrs. Barrack is best known for the tremendous amount of work she has done in the Alaska Crippled Childrens' Association. She has been president of the association for four years and through the drives and dances they brought in a total of approximately $10,000 annually. Much of this credit is due to Mrs. Barrack.

In the early 1920's, Mrs. Barrack served the Republican party as a committee woman. She was also active in the carnival association and participated for a number of years after it was incorporated.

As a Senior Mother Advisor for the Rainbow Girls, Mrs. Barrack was a great factor in its beginning and served on the advisory board for three years. She also helped organize the Parent-Teacher Association and served as the PTA president and secretary.

Other activities included the Eagles Auxiliary, the Soroptimist Club, of which she is past president and was a delegate to the 1950 convention in Seattle, the Amaranths, the Gray Ladys, the Episcopal Church, and a life member of the Country Club and social chairman of the Fairbanks Concert Association.

In 1955 she received the "Far North Press Award" for her philanthropy in encouraging cultural advancement and higher education in Alaska. She also donated the memorial carillon on the University of Alaska Fairbanks campus in memory of her husband, James E. Barrack who died the previous year. Two years later she established a scholarship in memory of her daughter Barbara, who died of cancer in 1957.

In addition to aiding and helping in many service organizations, Mrs. Barrack found time to raise three lovely daughters, Bonnie, Beverly, and Barbara, all of whom married and moved outside. The Barracks saw each of the girls attend college and graduate.

Here is a woman that was sincerely dedicated to Alaska—financially as well as physically—and to its progress.

Ruth Barrack is also mentioned in this article

All photos courtesy of Bonnie DeVos