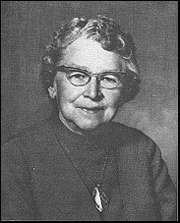 Professor Lola Tilly as chairman of the board of directors of the National Retired Teachers Assocation.

Lola Cremeans Tilly left the University of Minnesota in 1929 to come north to accept a job as head of the department of home economics at the Alaska Agricultural College and School of Mines. She served 30 years as a member of the faculty at the University of Alaska and over half a century contributing to the community.

After retirement from the University of Alaska she was active in her church, in community affairs in Fairbanks and on Maui in Hawaii and in a number of state and national organizations.

After two weeks by train from Illinois to Minneapolis and by pullman to Seattle, another week by steamship to Seward, then two days to Fairbanks by train, Lola and the friend she convinced to accompany her, arrived in Fairbanks. In the absence of campus housing, they stayed at the Nordale Hotel and traveled to College by Brillcar's gas powered railroad "commuter." The campus was a three-story structure which housed all the academic programs and the gymnasium-all purpose room. 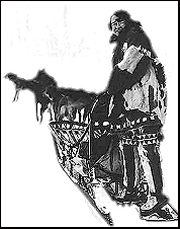 She remained head of the home economics department until 1937, when she married Gray S. Tilly, her engineer husband for the following 36 years. University rules didn't permit married women to work for the university in those days. In 1942, the rules were changed and she resumed her position. She continued teaching until her retirement in 1963. At that time the University of Alaska conferred an honorary doctor of humanities upon her and named her professor emeritus.

On Maui in Hawaii, her annual vacation destination, Lola Tilly was known as "Whirlwind Tilly" because of her hectic daily schedule which started at 6 a.m. with a swim. She was regularly out to a luncheon, dinner, meeting, seminar or busy making a presentation. Her schedule was no less hectic in Fairbanks.

Lola described those early years at the $50,000 "woodshed"— the name given to the college by a legislator who refused to vote for appropriations in the mid-1920s, with candor. She admitted the good old days weren't all that good, but was proud she had the opportunity to be involved in the challenge of history in the making. According to Lola Cremeans Tilly, "The 'woodshed' is long gone, but it symbolizes a firm foundation for our present center for excellence in education." 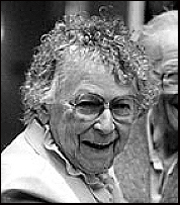 Professor emeritus Lola Tilly shares a smile with alumni during the reuion luncheon on May 10, 1986 at UAF.

Lola Tilly Funded two scholarships prior to her death in 1996:

The Lola Cremeans Tilly Scholarship(s) at the University of Illinois - awarded to juniors and seniors majoring in one of these areas Consumer Economics and Finance; Dietetics; Human Nutrition; Consumer and Textile Marketing; Hospitality Management or Human Development and Family Studies. Selection will be based primarily on academic merit. Funding provided by the late Dr. Lola Tilly of Fairbanks, Alaska. She earned bachelor's and master's degrees in home economics at the University of Illinois in 1920 and 1921

Gray S. & Lola C. Tilly Scholarship - Lola Tilly established this fund in memory of her husband who was a Fairbanks businessman, for a junior, senior or graduate student in any major at the University of Alaska. Lola Tilly was a professor and head of the home economics department here from 1929 to 1937, then again from 1942 to 1963.

Things in Fairbanks Have Changed Quite a Bit in Fifty Years

Dedication program for the Lola Cremeans Tilly Commons, May 1985