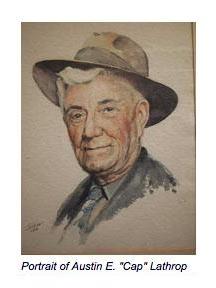 Austin Eugene “Captain” Lathrop was born in Lapeer, Michigan, on October 5, 1865, the son of Eugene and Susan (Sarah) Miriah Parsons Lathrop. He was still a baby when the family moved to Harrisville Michigan where he completed elementary school and quit attending during his first year in high school. When he was sixteen years old the family moved to Ashland, Wisconsin. In Ashland, he worked at a variety of jobs involving draying and contracting business with teams of horses.  While engaged in that business Captain Lathrop read of the disastrous Seattle fire of June 6, 1889.

He left Ashland and was on his way to the Pacific Northwest. Upon his arrival in Seattle he sent to Wisconsin for several teams of horses and engaged in the contracting business wrecking damage buildings and clearing the land for re-building. He pushed his business with such energy that ins a short time he was working forty teams and became known as the “boy contractor,” being at the time but twenty-four years old. 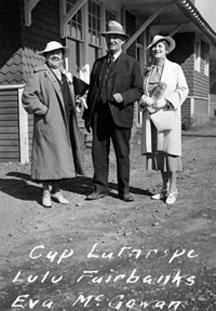 By 1890, with Seattle has been largely rebuilt, Captain Lathrop moved to Anacortes on Fidalgo Island. He cleared the town site, graded streets and built the electric road from Anacortes to Fidalgo City, prospering until the panic of 1893, in which he suffered severe losses. He moved his equipment and headquarters, locating on Protection Island some twelve miles from Port Townsend.

There he started several enterprises. He developed one of the region’s showplaces, where he entertained many famous visitors, including President Harrison. He engaged extensively in chicken ranching, and was the first person to stamp the date on eggs to show their freshness.

Captain Lathrop’s first active interest in Alaska was aroused by news of the gold strike at Cook’s Inlet. Seizing the opportunity the gold rush opened in the transportation business, he purchased a half interest in the steam schooner, L.J. PERRY and for some years operated the vessel in Alaskan waters. It was this connection with the sea, which won Captain Lathrop the title of “Captain,” and he has since been known as “Cap.”

The year 1901 may be taken as the date of his entry into business in Alaska proper. In that year he took the first standard drilling rig to the Territory and used it to prospect for oil in the Cold Bay district. Shortly thereafter he moved to Valdez. In Valdez he organized the California-Alaska Mining & Developing Company to prospect for copper in the Kotsina district. Copper was found, but could not profitably be mined because of lack of transportation facilities to move it to market. 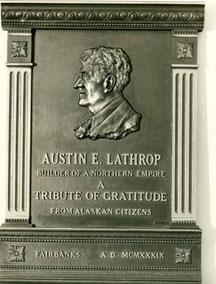 Beginning with 1907 Captain Lathrop expanded his undertakings into several cities and many enterprises. Moving in that year to Cordova, he there founded the Alaska Transfer Company, and a year later entered the theater business with the purchase of a theater. In 1917 he added to his holdings by constructing a large apartment house and theater, which is still the finest building in the city. In 1935 he constructed a cannery, which he operated until 1937, when labor difficulties stopped operations; this enterprise he sold in 1940.

His alertness to business opportunities was displayed again in 1932 when he constructed a large airplane hangar and shop adjacent to the government’s airfield. He is president and owner of the Cordova Commercial Company.

In 1915 he extended his business interests to the new town of Anchorage, when he founded the transfer company there to handle the business created by the building of the Alaska Railroad. In the following year he constructed an apartment house and theater.

In 1923 the city of Fairbanks was brought into the realm of Captain Lathrop’s activities. In that year he purchased a theater. In 1924, his Alaska Moving Picture Corp. produced The Chechahcos (sic), the first feature-length film shot entirely in Alaska. He acquired an interest in the Healy River Coal Corporation, which operated a mine approximately 114 miles south of the city. In order to insure the efficient and stable management of that company, he then purchased control. Establishing a new camp and taking personal charge of the operation of the mine, he developed it into the largest coal mine in Alaska. He built, in 1932, new bunkers to facilitate transportation of the coal, and to improve the efficiency of the mine, which has made possible much of the large-scale mining in the Territory by keeping the scores of massive dredges, supplied with fuel.

Captain Lathrop’s building enterprises in Fairbanks were enlarged in 1927 by the construction of a theater building of reinforced concrete, the first building of concrete in the city. At the time his judgment in using concrete was questioned, many holding that a concrete building could not withstand the extreme changes in temperature. Time has proved his judgment. In 1937-38 he constructed another large reinforced concrete building, which houses two of his other enterprises. On the first floor are located the NEWS MINER and the ALASKA MINER both of which he is publisher. On the fourth floor are located the offices and studios of the radio station KFAR, of which he is an owner. Captain Lathrop’s latest building enterprise was the construction, in 1940, of the Lacey Street Theater, which is the most expansively furnished theater per seat in Alaska or the United States.

The business of which he is president includes: Tanana Publishing Company the Midnight Sun Broadcasting Company, and the Healy River Coal Corporation.

He served as national committeeman from Alaska from 1928 to 1932, and has served in the Alaska Legislature representing the third division. He was a member and vice-president of the Board of Regents of the University of Alaska from 1932-1950. Elmer E. Rasmuson was appointed to take his place on the Board. Lathrop was active in the financial dealings of the university. In 1948, when the university was badly in need of funding, Lathrop helped secure $200,000 in interest-free loans from private businesses.

Austin Lathrop is also mentioned in these articles

A Fairbanks 50: Remembering a few who helped build a frontier town