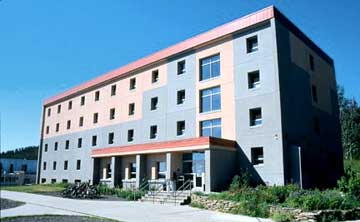 The Austin E. Lathrop Residence Hall opened in 1962 as on-campus housing for 134 male students. The $750,000 five-storey building was financed by the sale of revenue bonds authorized by the 1961 Alaska Legislature. Olsen and Sands of Juneau designed the building and the general contractor was Helbb and Narodick of Seattle.

For a number of years Lathrop Hall was coed by floor. In 1995, Lathrop was renovated and equipped with new furniture and wiring for cable television and high-speed Internet connections.

In 2007, Conference Services converted Lathrop Hall into accommodations for campus visitors, who paid for their lodging. Funds generated were used to keep costs down for students living on campus. Changes in student housing needs prompted another shift in 2008, when the first two floors were allocated for graduate and non-traditional student housing and the upper three floors were available for campus visitors. In 2009 Lathrop was once again designed as a residence hall and as a result there are presently no accommodations on campus for visitors.