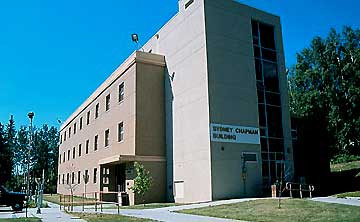 In 1948, the U.S. Congress appropriated $975,000 for construction of an earthquake-proof three-story building for the fledgling Geophysical Institute at the University of Alaska. On Emeritus Day, July 1, 1949, Terris Moore, new president of the University of Alaska, President Emeritus Charles Bunnell and Stuart Seaton, the Geophysical Institute’s director, laid the cornerstone. When the building was completed in 1950, it was considered the finest research facility of its kind in the United States.

In 1951, President Moore began assembling a first-rate research staff for the newly created Geophysical Institute. He asked Professor Sydney Chapman to be the advisory scientific director. Under Chapman, the GI became the core of the university’s research and graduate programs.

The 19,000-square-foot building boasts an observation deck of an additional6,000 square feet. The penthouse of the building has six removable hatches in the roof, designed to aid in astronomical research and once had an astrodome housing a 12-inch reflecting telescope. In June 1994, the dome and telescope were donated to the Fairbanks Astronomical Units astronomy group.

Today, the building houses the Department of Mathematical Sciences, classroom space and a computer lab. The top floor is used for storage.

Sydney Chapman is also mentioned in these articles: