Blue Babe, A Messenger from the Ice Age

Blue Babe, A Messenger from the Ice Age 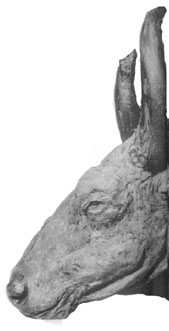 Uncovered during a mining operation, the carcass of an Alaska steppe bison has revealed the story of the animal's Ice Age death to scientists at the University of Alaska Museum on the UAF campus.

Gold miners Walter and Ruth Roman and their sons discovered the carcass in 1979 near Fairbanks, Alaska. Part of the bison was exposed as water from a hydraulic mining hose melted the frozen muck in which it was embedded. The miners, realizing the potential significance of their find, contacted the university.

Paleontologist Dale Guthrie determined the carcass was of an Ice Age bison (Bison priscus), probably tens of thousands of years old. He decided to excavate immediately in order to remove the frozen relic before it could deteriorate.

It soon became obvious that the bison carcass could not be excavated quickly because of frozen ground and the close proximity of large ice wedges. Although high summer temperatures melted several inches of soil per day, the bison remained frozen in the vertical bank for some time. 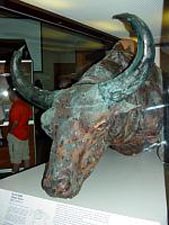 As the frozen soil surrounding the bison melted, they were collected and screen-washed to expose bone fragments, hair, insects, wood, and plant parts. The surrounding geology, the orientation and position of the bison carcass, and all material found in association with it were recorded. This information helped in piecing together the bison's story.

The bison carcass was covered with a blue chalky substance when it was discovered and excavated. A mineral coating of white vivianite was produced when phosphorus from the animal tissue reacted with iron in the soil surrounding the bison. When the vivianite was exposed to air, it turned to a brilliant blue, earning the bison the nickname Blue Babe, after Paul Bunyan's giant blue ox.

A radiocarbon date from a piece of skin shows that the bison died 36,000 years ago. Claw marks on the rear of the carcass and tooth punctures in the skin indicate that the bison was killed by an Ice Age American lion (Panthera leoatrox), an ancestor of the living African lion.

The lion opened the bison from the side, peeling back the skin and exposing the vertebrae, ribs, and upper limbs. The muscles of these areas were eaten away, allowing the bones to be pulled loose and partially scavenged by a variety of other carnivores and birds such as wolves, foxes, wolverines, and ravens.

The bison appears to have died during the fall or winter when conditions were relatively cold. This was revealed from remnants of underfur and a layer of fat on the bison carcass, which provided insulation and energy during cold winter months. After the bison died, the carcass probably cooled rapidly due to cold winter temperatures, and soon froze. The frozen carcass would have been extremely difficult for scavengers to eat, so it probably remained in its partially scavenged state throughout the entire winter.

The bison either died on a valley bottom or was transported there by movement of soils down slope during spring melt. Once the carcass was in a stable position on the valley bottom, it was buried by soils eroding from the surrounding hills. During the summer, small silt washes probably continued to cover it.

Although the carcass was covered by seasonally warm soils, the underlying cool soil inhibited decomposition. During the following winter, the bison was encased in frozen soils. Through time, the carcass became more deeply buried and eventually part of the permafrost zone. A vegetative layer developed on the surface, insulating the bison carcass from future thaw.

The preservation of this bison carcass was so exceptional coagulated pockets of blood were discovered in the skin at the base of the claw and canine teeth puncture wounds inflicted by the lion. Muscle tissue not scavenged by carnivores had a "beef jerky" texture and color. White greasy bone marrow remained in most of the long bones. The skin retained a layer of fat, although most of its hair was gone from slight decomposition. The hooves on all four feet were attached to the carcass, keeping their shape through the millennia.

The horn sheaths adhered firmly to the skull and were also in excellent condition.

Ice Age mammal carcasses are quite rare, but a few have been found in permafrost in Siberia and Alaska. The cold soils of the Arctic are one of nature's most effective ways of preserving animal tissue for tens of thousands of years.

Only two discoveries in permafrost, other than Blue Babe, have been reconstructed by a taxidermist and put on display in the world. These are a juvenile woolly mammoth and an adult woolly mammoth, both in the Zoological Museum in Leningrad. Blue Babe can be seen at the UA Museum. (Note: the head and forequarters of a baby mammoth were recovered in Fairbanks in the 1950s and are now in a refrigerated display at the American Museum of Natural History in New York.)

Alaska Science Forum - April 25, 2002 The Days of the Mammoth Steppe in Alaska by Ned Rozell