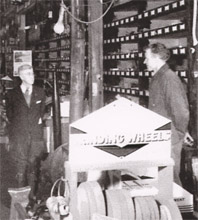 Description: A symphonic carillon made by the Maas-Rowe Company in California was installed in March 1955 in the Eielson Memorial Building. Ruth Barrack of Fairbanks donated $10,000 to purchase the carillon in memory of her late husband, James. This was one of the largest donations made to the university to date in 1955.

The symphonic carillon looks like a small, plain piano, with two keyboards that have 34 keys. It is played in a similar manner to an organ. Yet, underneath the plain wood and metal exterior lies the heart of the music and the genius of it. Here a series of finely crafted, musically tuned rods that look like stretched-out Allen wrenches, are struck by a hammer to make bell sounds akin to those of the Big Ben bell tower in London.

With a symphonic carillon there is no need to house all the varying sizes of cast-iron bells swinging from a bell tower. The tones reproduced from these struck rods are amplified to simulate the same sound and beauty of the entire spectrum of full-size cast-iron bells. This instrument not only rings musical numbers and chimes on the hour and quarter hour like a clock, but also stands as a symbol of academia. 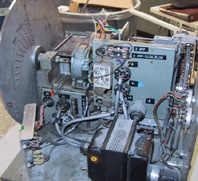 The original carillon installed in 1955 consisted of a variety of mechanical and electronic equipment to reproduce the bell sounds. It produces a big and powerful sound. There were three ways to use the system to broadcast the music.

1. Keyboard Console
Live concerts could be played through the keyboard by a carilloner and broadcast through outdoor speakers. The keyboard console contained its own set of toned rods or bells that were up to 24 inches in length.

2. Hour Toll Clock
The old "Hour Toll Clock" used a large wheel with a series of steel spokes coming out of it to ring the bells. The spokes were placed in strategic locations, and as the wheel rotated, it would cause a hammer to strike a rod—a very cleverly designed mechanism. Interestingly, the hour toll clock had its own set of toned rods contained in a 8-inch tall, brown metal box bolted to a wall.

The toned chiming rods in the back of the piano console. UAF photo by Todd Paris

3. Plastic Roll Player
The old "plastic roll-player" used long sheets of plastic punched with holes on a roll. As the plastic sheet moved through the machine, the holes allowed this series of metal "fingers" to come in contact with a metal drum. The drum being grounded allowed the "fingers" to close the electrical circuit and all the other related actions to occur that sounded the bells.

The price of the plastic tape with musical compositions for the carillon punched into it was $72 each in 1955. Six tunes could be recorded on one roll of tape. Individuals and organizations occasionally purchased this recorded music for the university.

How it Worked
The console and toll clock each have a series of 68 rods. The plastic roll player shares rods with the Hour Toll Clock. The rods differ in length, from small to large, and are bent to a right angle on each end. Each rod is designed to resonate one musical note. The rods are suspended in air by four thin threads and one end of the rod is suspended over a magnet with a coil wrapped around it. The physical action of pressing a key or of the rotating toll clock spoke touching metal creates an electronic impulse that signals a small solenoid to be activated. When the identified rod is hit with a striker, the sound is picked up and amplified and broadcast through outdoor speakers.

In 2003 the carillon unit was upgraded with a CD player. It plays pre-recorded carillon music through the loudspeakers. Originally the only way to play music was for a person to use the piano console or by using the plastic roll-player.

Ongoing Carillon Care and Maintenance
The carillons were first played at a concert on Easter Sunday in 1955. It was officially dedicated at commencement that May. The eight speakers for the carillon were installed atop the university water tower (between Eielson and Gruening buildings). 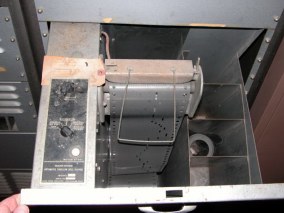 Depending on the direction of the wind bells and music could sometimes be heard across the entire College area. The piano console, the roll player and hour toll clock were originally housed nearby in room 218 of the Eielson building.

The carillon has been moved and renovated several times over the years. For a while it was installed in the basement of Constitution Hall, hidden behind ventilation equipment. Bennie Benevento and Bill Zito renovated it in the mid-1980s. The musical range was expanded and the mechanism and keyboard were moved to the control room above the Charles Davis Concert Hall. The speakers were relocated to the top of the Gruening Building.

In 2003 the carillon was upgraded with a CD player and a new programmable hour toll clock and the carillon was also installed in its present location—the basement of the Gruening Building. The piano unit was then moved to a roof top storage room in the Music Department. UAF Music Professor David Stech played the carillon for commencement. For a few years he would have a temporary connection wire stretched from the rooftop storage room of the Fine Arts Complex to the main unit in the basement of the Gruening Building. However, to hear the sound of the music, he had to open the storage room door to the outside. He then have to adjusted his pace, as the music he was hearing was significantly delayed as the sound travelled to the bell chime system, then amplified through the speakers back to him. After the CD player was installed, Professor Stech was able to prerecord the commencement music which enabled him to participate in the commencement excercises.

Currently, the carillon is programmed to sound through the broadcast speakers on each quarter of the hour. It chimes a longer melody at noon and 5pm. UAF's only carillon player, David Stech notes that playing the carillon requires a unique set of skills and style different from playing the piano. Carillon players must be cultivated and trained on the instrument in order to be proficient players.

Today the piano unit is playable, but in storage in the Fine Arts Building. Its appearance is pretty rough and desperately in need of being refinished. The keys and chiming rods are in good working order, but the woodwork would benefit from refinishing. To be usable, this piano unit needs to be moved near the main unit or permanently wired across the main campus to be plugged into the broadcast unit. Stech suggests moving the console unit to the basement of the Gruening Building, then plugging it in and allowing access for it to be played. Another option would be to place the carillon in a location where it can be seen, played and appreciated. Benevento said that this would honor the gift made by Ruth Barrack.

In the recent past, the carillon was mainly played for the graduation ceremony and alumni events. However, since graduation has been moved off campus, the traditional role of the carillon has officially ended.

Presently there is a small effort lead by Benevento to make a visual display case showing the old inner hour toll clock working, and having it softly chime at each quarter hour, in hopes of drawing interest to the carillon. This display would also describe and direct people to information about the carillon's history.