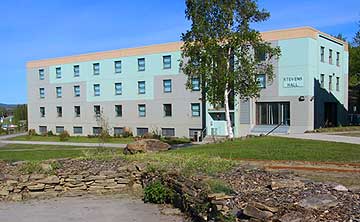 Morton Stevens Hall is identical in design to the McIntosh and Nerland halls, the eastern and central buildings in the dormitory complex on Denali Lane. It opened in 1958, one of five new residence halls built to accommodate the rapidly growing student population. Initially a men’s dormitory, the 100-student hall today is coed by floor. Students live in double or single rooms on four floors. In 1996, Stevens Hall underwent a major renovation and also had new furniture, high-speed Internet access and cable TV access installed.

From 1954 to 1960, President Patty oversaw construction of new facilities on campus at a rate of at least one per year. He raised funds from the Alaska Public Works program averaging about $1 million each year. Morton Stevens Hall was one of many buildings built during Patty’s transformation of the university landscape.