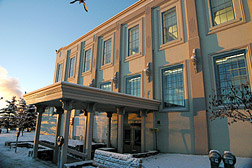 Built in 1931, the gymnasium was the first concrete structure on the UAF campus. The building was designed with two stories to house the gymnasium and the library, but during the Depression the territorial Legislature could appropriate only $25,000. So a single story was built and covered with a temporary roof until funds could be obtained to finish the building.

President Charles Bunnell held a firm conviction that the library should be housed in a fireproof structure, so he fought hard during the following legislative session to acquire the funds to finish construction. In 1935, the territorial Legislature appropriated $35,000 to complete the project, and the library, previously housed in Old Main, was relocated to the second floor. During the renovation of the gymnasium, the mezzanine ceiling was raised and floor space on the balcony and at the north end of the building was expanded to provide office space and a second floor, essentially making it into a three-story building.

The building was used for commencements, dances, theater productions and meetings as well as its gym and library functions.

On Feb. 6, 1956, nearly a thousand people witnessed the historic signing of the proposed Alaska Constitution. Because so many people showed up, delegates to the state Constitutional Convention moved the event to the gymnasium, which is why it was informally known as Signers’ Hall. In February 2006 the Creating Alaska celebration on campus commemorated the 50th anniversary of the signing with Gov. Sarah Palin delivering an address on the main floor.

In the early 1960s, the growing library was moved to the Bunnell Building and a new gymnasium was built in the Patty Center. In 1964, the museum collections were relocated from the Eielson Building to Signers’ Hall and remained there until May 1980, when the museum’s new home was built and opened on the university’s West Ridge.

The building was known as the old museum and used as a storage facility until 1983 when a state legislative appropriation allowed major renovations that converted it into office space with a link to the adjacent Eielson Building, which helped make both buildings more accessible. In addition, the building was officially renamed Signers’ Hall, acknowledging its history. It now houses the Office of the Chancellor and other administrative offices, including admissions and the registrar’s office.

History of the Hall