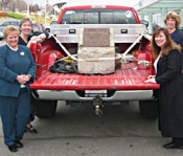 Posing with the stone in the President's absence is Bess Rounds, Jeannie Phillips, Barb Nilsen and Kathy Gruenig.

Bess Rounds, administrative assistant for the Office of the President, answered a phone call during the first week of October 2003. The caller said that the Tradition Stone was going to be on campus and soon would be making a tour of the Butrovich parking lot.

The callers were hoping to get President Mark Hamilton to pose with the stone; unfortunately, he wasn't in the office that day. Bess consulted with other members of the president's staff about acting as stand-ins. She didn't have any problem assembling volunteers for a quick photo-op. Rumor had it that the group currently in possession of the stone was going to have it on display at Starvation Gulch, the annual celebration in the fall semester where students from each dormitory compete to build the biggest structure out of scrap wood, and then enjoy the spectacle as they are all burned down.

"Here Lies TRADITION 1957"
For the students attending college during the years of 1953 to 1960, life under President Ernest Patty was one of major changes. Some of Patty's stated goals included a huge effort to clean up and rebuild the campus. Patty said in 1955, "We want a University that Alaskans can be proud of. The alumni are ashamed of it and it causes many students to go elsewhere." Through his efforts of continuous construction, sharp attention to detail, and maintenence of existing buildings, the campus was transformed into a prominent tourist attraction for local visitors to Fairbanks.

By the mid 1950s, Patty began focusing on a different phase of his cleanup plan, the look of the UA student population. He suggested UA offer courses in "how to make introductions, table etiquette, and general social behavior." In 1954 he suggested that "it would be nice to have the students dress for dinner once or twice a week this year. The boys could put on a white shirt, tie and coat, and the girls could wear dresses." Patty was reminded by students that one of the reasons they attend here was to "escape the regiment of civilization." Patty responded with, "Civilization has just caught up with you." In 1960 Time magazine published an article on Patty's efforts to clean up the student population. Stating "that students who 'used to brawl merrily in taverns' were now tamed by Patty's dress code . . ." 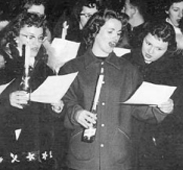 November 30, 1956 marked the day the student newspaper, the Polar Star announced boldly with a one word headline "PROHIBITION!" The article below the headline was titled "Dean Cashen's Memorandum, Based On Letter From President Patty, Establishes Prohibition On Campus."

President Patty offered students his justification for this move. After having to deal with several alcohol-related disturbances on the campus, he wrote requesting Dean Cashen to inform the student population of his new campus alcohol restriction policy. Patty assumed that most students would be happy with this pronouncement and was shocked when he was greeted with a landslide of written and verbal protests. Soon after, 202 students signed an open letter protesting the ban. Patty, firm in his position, refused to back down.

The evening of March 22, 1957, a protest staged by hundreds of students objecting to the president's announcement, marched by torchlight and gathered in front of Constitution Hall. There they had constructed a grave marked by a 400-pound concrete headstone with a metal plaque reading "Here Lies TRADITION 1957." While using empty beer bottles as candle holders, the protesters sang songs, acted out a scene from Shakespeare and took turns speaking to the various forms in which tradition had died on campus. 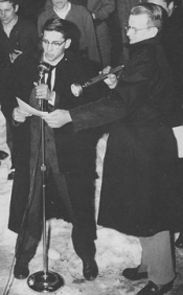 After the protest march and activities, the administration asked that the headstone be removed and destroyed. Instead, it was stolen. Throughout the years the "Tradition Stone" has appeared and disappeared, and has been stolen and restolen as various campus groups and organizations acquire, lose and reacquire possession of it.