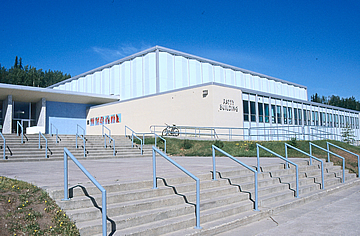 The Ernest N. Patty Building, located on Tanana Loop, was funded under the state of Alaska general obligation bonds program and designed by Linn A. Forrest Architects A.I.A. The building, known as the Patty Center, was dedicated in 1963. It houses a 2,700-seat gymnasium, a 25 yard swimming pool, courts for handball and racquetball, weight rooms, a rifle range, classrooms, locker rooms with saunas and a human performance laboratory. It is home to the university’s Reserve Officer Training Corps program as well as UAF’s NCAA varsity teams, which include Division II men’s and women’s basketball, cross-country running, cross-country skiing, men’s and women’s rifle, women’s volleyball, women’s swimming and Division I men’s hockey.In 1979, the 1,300-seat Patty Ice Arena was built as an addition on the west side of the center.

The Patty Center is located next to the Student Recreation Center, which opened in March 1994. In 2006 approximately 2,000 square feet of new locker room space was built on the south side of the Patty Ice arena. New hockey boards and new flooring in the bench and bleachers area were also installed that year. In 2007 theconcrete walking deck at the main entrance to Patty Center was rebuilt to install heat piping and a waterproof membrane. The membrane will prevent flooding in the basement and the heated slab will improve wintertime safety and facilitate snow removal.

In 2008 an outdoor ramp and a wheelchair-accessible elevator were added. In 2009 old water pipes in front of the building were replaced and the drop-off area between Patty Center and Patty Ice Rink was widened to improve access.