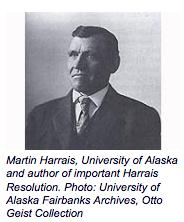 Martin Luther Harrais was born on January 2, 1865 in Russia; now present day Riga, Latvia. He immigrated to the United States in 1887. Harrais arrived in Seattle in the early 1890s to work for the Seattle Dry Dock and Shipbuilding Company. He worked in the shipyards and also attended night school. On June 1897 he graduated from the University of Washington with a degree in mining engineering, and joined the gold stampede to Dawson.

The Tanana Valley Railroad (TVRR) began life as the Tanana Mines Railway.  Due to learning about gold strikes in the Chena and Chatanika river basins, and a need for dependable, year-around transportation to and from the mines, Harrais and Falcon Joslin traveled to the Tanana Valley to evaluate the possibility of building a railroad from the Tanana River to Fairbanks and the gold fields in 1903. They laid plans and secured financial backing from British investors who had financed several small industrial railroads in the Dawson area and the White Pass And Yukon Route.

Construction began in the summer of 1904 at Chena along with the erection of a sawmill, rail yard and other support structures. The project was haled due to engineering problems. Due to hidden permafrost, lack of special equipment and supplies needed for the construction, the project was halted and completed the following summer.

Although Harrais mined successfully in the Klondike and in Fairbanks, he lost most of his fortune after investing in the doomed town of Chena. As a result, he worked for the Kennecott Copper Corporation during the early 1920s, prospecting along the upper Chitina River. In 1924, for example, Harrais examined part of lower Young Creek. Later that decade, Harrais attempted to develop his own claims near the end of the Chitina Glacier, but lost his savings in a bank failure in 1932 during the Great Depression.

In 1920 he married Margaret Keenan, who is an educator. The couple moves down to Valdez, while Harrais continued to prospect for gold. On October 23, 1934, Governor Troy appointed him U.S. Commissioner of Valdez.

In 1936, Harrais was appointed to the Board of Regents to succeeded Arthur A. Shonbeck. In the same year Regent Martin Harrais had the foresight that the university's unique geographical location would allow it to be at the forefront of the RADAR and Radio revolution. He wrote a special resolution the "Harrais Resolution" offering the federal government a site on which to construct research facilities at College Hill. The resolution had set in motion the eventual establishment of the Geophysical Institute.

Upon Regent Harrais’s death, Thomas Donahoe was appointed to take over his place on the Board.

Martin Harrais is also mentioned in these articles

Story in the Farthest North Collegiate: Pioneer of Alaska, Aged 71, U.S. Commissioner at Valdez, passes away in Seward