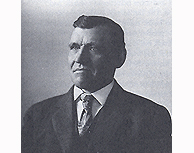 By the late 1930s and early 1940s scientists around the world began to develop theoretical constructs and equipment to prove or disprove their theories concerning relationships among Earth's aurora, ionosphere, magnetic field and radio wave propagation.

In 1935, the Alaska Agricultural College and School of Mines became the University of Alaska and geophysical science did not exponentially grow as expected after the Second International Polar Year in 1932 (Part 1) and there were only one or two staff members. College Hill was only a scientific observing station that consisted of operating routine recording instruments, including a seismograph, for the Department of Terrestrial Magnetism "DTM" and the U.S. Coast and Geodetic Survey. 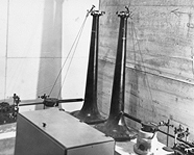 In 1936, Regent Martin Harrais had the foresight that the university's unique geographical location would allow it to be at the forefront of the RADAR and Radio revolution. He wrote a special resolution the "Harrais Resolution" offering the federal government a site on which to construct research facilities at College Hill. The resolution had set in motion the eventual establishment of the Geophysical Institute. President Bunnell presented the resolution to Anthony J. Dimond, Alaska's nonvoting delegate to Congress. It did not pass in Congress until 1946.

With the United States entering WWII in 1941, the understanding of propagating ionospheric radio wave transmission became a primary goal of the University of Alaska to help in the war effort. To reach this goal, Carnegie Institute's John Fleming and President Bunnell had created a cooperative research facility "College Observatory" that was funded and operated by the Department of Terrestrial Magnetism "DTM". The newly appointed supervisor Lloyd Berkner arrived in April 1941 with Stuart L. Seaton (future director of Geophysical Institute) from DTM to begin the installations. With the help of Ervin Bramhall and four students, they established the new College Observatory from 1941-1946.

Despite high turnover of faculty, staff, and students from enlisting or volunteering, the College Observatory was able to supply invaluable data on air navigation, geomagnetism, "light of the night sky", radio communications, and seismological observations to Allied Armed Forces in the Pacific Theater. A radio direction finder was also invaluable in locating distant radio transmitters operated by opposing Axis nations. The US Army even used future University President Terris Moore's mountaineering expertise for a cold weather expedition to Denali designed to test clothing and equipment. Moore's trip also contributed to an experiment designed to determine the extent of cosmic ray interference with radio wave propagation. 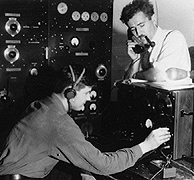