University Board Member is Civic-Minded Woman 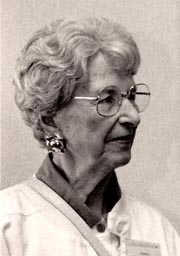 Mrs. Loftus, born in Culbertson, Montana, is the daughter of the former Mr. and Mrs. R. C. Stanfield. She attended high school in Eugene, Oregon, and graduated from the University of Alaska in 1949, majoring in business administration.

Mrs. Loftus came to Alaska aboard the "Admiral Watson" in 1925. Her sister was living in Fairbanks at the time, and soon persuaded her to remain. After arrival here, Mrs. Loftus worked for the purchasing department of the Fairbanks Exploration Company for a short while, and then worked as deputy clerk of the court for two years.

She was married to Ted Loftus in 1927, and they moved to the F.E. Company Creeks, and later to the town of Chatanika. The couple had two children, Nancy and Jule.

Mrs. Loftus served as commissioner at Chatanika for several years, while it was a thriving community. Among the many activities in which she had participated were welfare and service aid projects. While her children were small, she served as an officer in the kindergarden association, PTA president, and 4-H leader. She was chairman of the tuberculosis committee for four years.

When the Territorial Alumni Association was formed, she was elected president and helped draft its constitution. She is also a past president of the University of Alaska Alumna Association, past president of the Episcopal evening guild, charter member of the PEO Sisterhood, and held membership in the Order of the Eastern Star and Pioneers Women's Auxiliary. She was president of the Women's Auxiliary of the Institue of Mining and Metallurgical Engineering, and a member of the university Board of Regents. V. Louise Kellogg was appointed to take her place on the Board.

Through these various organizations, she helped with Red Cross collecting and USO service work. She also worked as disaggregator in the laboratory of the geological survey.

She says that the thing that surprised her most about Alaska was the versatility of the old "sourdoughs." Most of them spoke several languages, and were self-educated, being well versed on international affairs.

She has made several trips "outside," having visited Mexico and driven up the Alcan highway three times. "But," she adds, "we're always happy to get back home again."

Audrey Loftus is also mentioned in this article