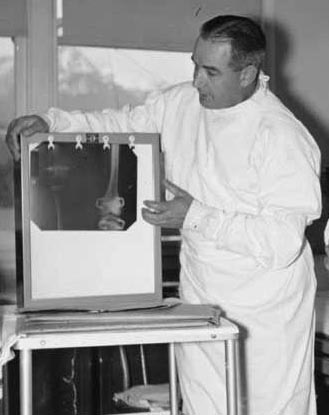 Philip Hance Moore was born on February 28, 1904 on a farm near Fall City, Washington. The son of Ben and Justina Moore. More graduated as valedictorian from Fall City High School in 1922. In 1922 he enlisted and served with the United States Marine Corps until honorably discharged at the end of the three year enlistment in 1925.

Dr. Moore came to Alaska in 1947 and served for the next nine years as an orthopedic surgeon for the Alaska Department of Health in Mt. Edgecumbe in Sitka. During his time as Orthopedic surgeon, he waged a personal fight against tuberculosis among Alaska Natives and his work led to the virtual elimination of the disease in Arctic villages. In 1956 he became chief of surgery for the Sitka Community Hospital and a consultant to the Ketchikan General Hospital.

In 1955 Moore was appointed to the University of Alaska's Board of Regents to complete Walter Stuart's term and served his own term which ended in 1965. William Whitehead was appointed to take his place on the Board.

Dr. Moore received an honorary Doctorate of Science degree from the University of Alaska in 1967 for his advancement of medicine in Alaska.

Dr. Moore continued private practice in Sitka as an orthopedic surgeon until 1970.

Dr. Philip Moore is also mentioned in this article