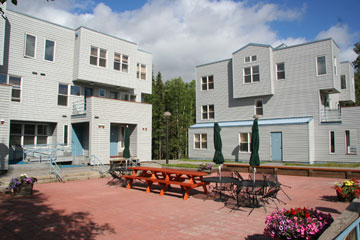 The Cutler Apartment Complex is on Rainey Ridge, adjacent to the Reichardt Building. These townhouse units were opened in 1984 as the Student Apartment Complex, often called SAC. The 59 two-bedroom units and one four-bedroom unit accommodate 240 single students. Each apartment is fully furnished, including a kitchen, living area and a full bathroom. The state’s One Percent for Art Program provided the stained glass in each entryway.

In 1992, the university adapted six apartments for students with disabilities, including two apartments for hearing-impaired students. In 2006 a project to upgrade and renovate siding on the apartment complex was completed. Additional renovations completed the following year included new tile, carpet, appliances, plumbing, doors, cabinetry and light fixtures. A new fire sprinkler system was installed in 2008 — 2009 in the Cutler and Hess apartment complexes and in Stuart Hall. New energy efficient windows were slated for installation in 2009 along with additional interior renovations.

The complex, which is coed by apartment, houses single students who are at least in their sophomore year. In September 2002, 10 apartments in the 400-block were designated for graduate students only.

The apartments were renamed the Howard Cutler Apartment Complex in November 1999 at the request of the Board of Regents.