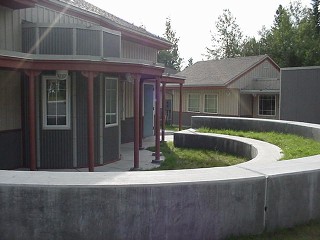 The small cluster of four buildings off the west side of Columbia Circle was built during the summer of 1996 and spring of 1997; it opened for students in August 1997. Originally called the Inupiat House, the MacLean House is a family-style residential facility designed to help rural students make the transition to living in a larger community and adjust to campus life. In September 2000, at the request of the Arctic Slope Regional Corp., Inupiat House was rededicated and renamed the Eileen Panigeo MacLean Inupiat House.

A partnership between UAF and the Arctic Slope Regional Corp. provided $1.8 million to construct housing for Native students, some of whom left their villages for the first time to come to college. ASRC, with funding from the Arctic Education Foundation, designed, financed, constructed and furnished the facility, which met their shared goals to improve the recruitment, retention and graduation of Alaska Native students. Arctic Slope Regional Corp. made a $1 million endowment for continued MacLean Inupiat House maintenance and support.

Up to 25 students live at MacLean Inupiat House, which is coed by building. The facility includes residences, a common lodge area, visiting-parents’ apartment, computer lab and laundry facilities. A large freezer and kitchen allows students to receive and prepare traditional foods.