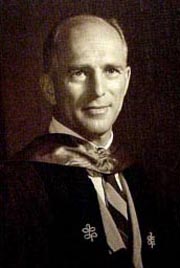 In 1948, President  Bunnell, 70 years of age and in ill health, announced his intention to retire and a search began for his successor.

Terris Moore was the second president of the University of Alaska, serving from 1949 to 1953. Moore, who was known as the "flying president," was an avid mountaineer and first climbed peaks in Alaska in 1930. As president of the university, he climbed and named "University Peak," in the St. Elias Range. Before becoming the university president, he was a successful investor and businessman and had a distinguished academic career.

Moore increased the physical plant of the campus by overseeing the construction of the Sydney Chapman Building, which housed the Geophysical Institute until 1970; the Brooks Memorial Mines Building; Andrew Nerland Hall; completed the Eielson Building; and created a new master plan for the campus, some of which is still in effect today. On-campus enrollment reached 409 in 1953, and the university began offering courses on several military bases in Alaska.

Moore, with Sydney Chapman's help, assembled a distinguished research staff at the Geophysical Institute and established the first formal graduate study at the university.

Dr. Terris Moore didn't stop thinking about the University of Alaska when he retired in 1953. Over the years he donated more than $30,000 in gifts and grants towards what he called his "sentimental objective" of repaying the entire salary he received during his four years as president. At commencement exercises in May of 1964, he made the final installment in the form of a check for $31,325. The check was presented by a member of the Board of Regents during Dr. Moore's tenure, Dr. C. Earl Albrecht, who received an honorary doctorate degree from the university. Moore died in 1993. 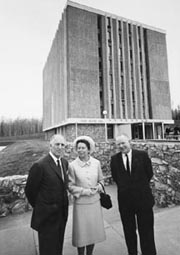 Terris More is also mentioned in these articles:

How Old is the University of Alaska?

History of the Presidents' Residence, Part 1

Wood Presidency Draws to a Close