Wood Presidency Draws to a Close 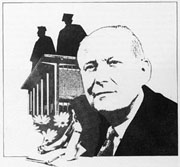 This article appeared in the February, 1981 issue of Now in the North.

As Dr. William Ransom Wood prepares to step down from the presidency of the University of Alaska, he has just one regret: "Time runs out too fast."

"At some point you come to realize how brief a time you've got to accomplish all the things you can conceive, and finally you come to the full realization you're not going to get all of them done," said the educator.

Dr. Wood, fourth president of the state university, after Charles E. Bunnell, Terris Moore, and Ernest N. Patty, has guided the institution for 13 years. Since he assumed office on July 1, 1960, the university has undergone unprecedented growth and development, made possible by statehood and strong public support.

In 1960, the university consisted of the original main campus at Fairbanks and four community colleges. Since then, major campuses have been developed in Anchorage and Juneau, the number of community colleges has grown to eight, 20 extension and public service centers have been established, and research facilities have proliferated on the Fairbanks campus, greatly enhancing the university's national and international reputation as a center for research and advanced study.

This development was part of a plan adopted by the Board of Regents in 1964 to decentralize the university and to take education to the people. A single campus could not meet the needs of the vast state.

The growth of a university is measured in more than buildings. In 1960, the Alaska institution's total full-time enrollment was 921 students. Nearly that number will be receiving degrees from it this year. More than 10,000 students were enrolled in academic programs last fall.

It is estimated that nearly 30,000 Alaskans—some 10 per cent of the 49th State's population—have some direct instructional contact with their university each year.

"Each time I reflect on the progress of the University of Alaska during its relatively brief history, I am overwhelmed by the tremendous job the people of the state have done for themselves," said Dr. Wood.

One of his great satisfactions is the support the voters have given the university. All the bond issues for university construction that have gone on the ballot since statehood have been overwhelmingly approved.

Other satisfactions have been our success in attracting some "extraordinary professional talent to the university" and the "very fine relationship I've enjoyed with the university's Board of Regents." The regents, he said, "have been very hard taskmasters at times but they have always been fair and have supported good effort."

Peering at the university's future, Dr. Wood sees it as "excellent in the long range but close to the traumatic in the short range." So in the near future "we're simply going to have to curb development to fit the availability of funds," which means that "a great many educational demands—legitimate requests that come from the people for educational opportunity and services—will not be met."

The educator adds: "Once Alaska if, permitted to develop its resources, it is in an extraordinarily advantageous position, for it has resources far in excess of population. And if the rate of development of these resources can proceed in advance of the rate of population growth, we have a very, very healthy future ahead of us."

When Dr. Wood steps down from the presidency on June 30, he will have spent 45 years in education. He has been a public school teacher and coach, public school administrator, university teacher and community college director. He has served in the U.S. Office of Education as a specialist in higher education planning. He was a University of Nevada vice president from 1954-60 and in his last two years at that institution was also director of its Desert Research Institute.

A professor of English, he holds B.A., M.A., and Ph.D. degrees. He has an honorary Doctor of Laws degree from Illinois College, where he did his undergraduate work. He has been an educational consultant to a number of foreign nations, including South Vietnam, Wood been honored for his work. He is a poet and author of many publications. He served with the U.S. Navy during World War I and retired from the U.S. Naval Reserve in 1970 with the rank of captain.

Dr. Wood is an honorary member of the Pioneers of Alaska and has been elected to the Forty-Niner Hall of Fame. Students of the university voted to name the new student union building on the Fairbanks campus for the educator.

William Ransom Wood is also mentioned in these articles: