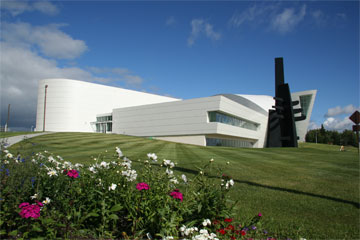 Charles Bunnell, the college’s first president, envisioned Alaska’s university as a center of research about Alaska. No part of the institution fulfilled that goal better than the University of Alaska Museum of the North. According to tradition, the museum began in 1922 as a single display case in Bunnell’s office. Its first exhibit was in 1929, a collection of artifacts and paleontological specimens collected by Otto Geist. Over the next 50 years, the museum had many homes around campus, including the Eielson Building and Signers’ Hall.

In 1980, the University of Alaska Museum of the North moved to a new building on West Ridge, the first time the museum, its staff and collections were all housed under one roof in a building designed specifically with museum collections in mind. A $6.5 million appropriation from the Alaska State Legislature in 1978 funded the original building.

Although the 40,000 square foot museum was a vast improvement over the cramped space in what is now Signers’ Hall, it was always intended to be the first phase of a larger building. By the early 1990s, the museum needed more space to display and house its growing research collections, and a campaign began to expand the museum.

In a partnership unprecedented for state buildings in Alaska, the museum’s expansion was funded primarily by non-state funds. More than 600 foundations, corporations and individual donors made up the private base of support. Combined with funding from the state of Alaska and federal grants, more than $42 million was raised for construction, equipment and furnishings.

After a competitive national search, UAF contracted with Alaska-based GDM and Minnesota-based Hammel, Green and Abrahamson to design an expanded museum. Construction began in June 2002 and was completed in summer 2006. The expansion includes a 28,000 square foot research center, nearly doubling the size of the previous collections area; the Rose Berry Alaska Art Gallery, a 10,000 square foot exhibition space to showcase the full spectrum of Alaska art, from 2,000-year-old ivory carvings to contemporary sculpture; a 3,000-square-foot learning center with a smart classroom for university classes, a pre-college education center and an art study room; a multimedia auditorium for presentation of lectures, films and performances; and an expanded museum store.

Today, the museum is both a top visitor attraction and thriving research center, holding more than 1.4 million artifacts and specimens representing thousands of years of cultural traditions and millions of years of biological diversity in the North. Since the opening of the new wing, the museum has become an architectural icon for Alaska.

Otto Geist is also mentioned in these other articles: