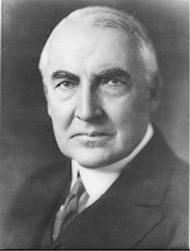 LaVern Keys recalls President Harding's visit to the new college on July 16, 1923. Keys was the college's first secretary. Her account is excerpted from the LaVern Keys Collection in the University of Alaska Archives.

It was to be a very memorable day. We were to be inspected by President Warren G. Harding and some members of his Cabinet who were traveling with him.

Primarily, President Harding came north to drive the golden spike into the new railroad bridge across the Tanana River at Nenana. He then continued on the brand new railroad to Fairbanks to inspect the Alaska Agricultural College and School of Mines. The College had opened on Sept. 13, 1922, with an enrollment of six students. At the end of that school year, we had twenty-three students and an excellent short course enrollment.

It was a bright, sunny day, really hot, when the group arrived in Fairbanks. It must have been a terribly bumpy ride between Nenana and Fairbanks— new road bed, hot, and mosquitoes! 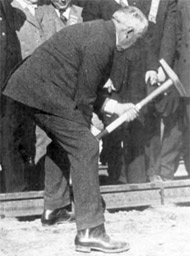 The group was put up at the Nordale Hotel in Fairbanks. Mrs. Harding was indisposed after the exhausting trip, so she did not come out to the College. In 1923, the College was some five miles from Fairbanks, a dirt and ungraded road, dusty and bumpy!

School was out, and no students or faculty were about. Early that morning, (Sunday), I had walked the railroad track (three miles) to the College -- the usual way to get there unless I was fortunate in getting a ride with one of the workmen on a weekday. President Bunnell and I spent the morning dusting and straightening up the various rooms, ate our box lunches, and then disappeared in the "men's" and "women's" rooms to clean up. President Bunnell did not live on the campus then. The house for him had been built near the entrance, but he was still living in Fairbanks.

A little later he appeared in the "library" all polished up in a dark suit. He looked so dressed up and nice, (quite different from rolled-up sleeves and sweaty brow of a few hours earlier)!

As for me, I put on a white dress, white slippers and stockings, and even pinned on my Kappa key.

We watched the engine and two cars trundle along on its way to Fairbanks. It must have been a terribly bumpy ride!

They must have had a hurried lunch and rest period, for an hour and a half later we saw rolls of dust announcing the progress of the cars bringing our guests. There were not many cars in Fairbanks then, just five passenger open cars, certainly no fancy limousines! Just a contrivance to get from one place to another. Some five cars had been borrowed and polished up for the occasion.

We met the cars and escorted the group up the front steps. Of course President Harding was in the lead with his attaches, also Hoover, Works, and others whom I no longer recall. There were only a few women, of whom Mrs. Hoover impressed me the most.

President Harding and the Cabinet members were President Bunnell's responsibility. The "lesser" men and women were my responsibility. As it turned out, Mrs. Harding was indisposed and remained in Fairbanks, as did some of the others. So I only had a few to look after. I wound up with Mr. and Mrs. Herbert Hoover, Secretary Works, and several others. 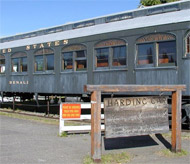 Of course I was all eyes. I noticed that President Bunnell did not walk alongside President Harding. That was how dumb I was on etiquette, but I followed suit!

As President Harding ascended the stairs, I noticed how immaculately he was dressed, in an English Norfolk suit, perfectly fitted and pressed. Mr. Works was neat in a dark business suit, but soon removed his coat. Mr. Hoover was just plain hot in his shirtsleeves, and his pants were a series of wrinkles. But he was so friendly you forgot his appearance. I took to Mrs. Hoover right away. She was the perfect lady, but so friendly you forgot her position. I learned she also was a member of Kappa Kappa Gamma sorority, so I was glad I had worn my pin.

We proceeded through the building from garret to basement. It really made quite a procession. You could hear us coming (and feel us) on those wooden floors.

When we reached the two rooms made into the library, President Harding made for the center table. Mrs. Sullivan, the wife of the engineer for the College, loved flowers and had brought her beautiful blooming gloxinia to help make the library look nicer. President Harding fondled the plant with loving hands. He said his mother had grown gloxinias.

Looking around for my other tour guests, I found the Hoovers at the center table in the next room, busy chatting and thumbing through the large autographed book placed there. It was Agricola's "De Re Metallica," published in Latin in 1556, and translated by the Hoovers and published by them in 1912. The two had translated it and prepared it for publication years before. The love and interest in sharing memories was beautiful to see.

From the library we went to my office. It was a large room, and later was used for a classroom. The guests milled around, and we escorted President Harding to the high bookkeeping desk to sign the register. We had opened a fresh sheet, furnished him with the best-looking pen I could find, (no fountain pen), with a brand-new point! The rest of the group then signed.

After some chatting, we finished the tour to the point of the beginning. After a little farewell chatting, we escorted our guests to their cars and bade them farewell. There is always "hindsight," it seems. As they drove away, I could not help but feel like we should have offered them at least a glass of juice, or even water!

No mention was made of political parties. The whole thing had been carefully planned by President Bunnell, and it was carried out without a flaw. We showed them everything, from the big water tank in the garret, to the heating plant in the basement. How little did we realize that we would not see President Harding again, that some three weeks later he would be gone, and Calvin Coolidge would be the President of the United States.