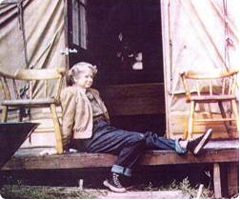 Originally ran on August 4, 2001 in the Anchorage Daily News

Ms. Venie "Louise" Kellogg was born Oct. 13, 1903, in Chicago to LeRoy DeWolf Kellogg and Ellen Neel Kellogg. She graduated from Vassar in 1925 with a bachelor’s degree in English.

Her family moved to Pasadena, California, and she lived there until World War II.

In 1942, following Pearl Harbor, she joined the Women’s Army Corps. She graduated from Officer Candidate School, then served in Britain and France. She attained the rank of major before returning to Pasadena.

She arrived in Alaska in 1947. After spending a year living in a tent, she created the Spring Creek Farm just north of Palmer in 1949 and built a dairy operation that became one of Alaska's top milk producers. She bought additional land from neighbors and expanded Spring Creek Farm to roughly 3 ½ square miles. Although she retired from active farming in 1990, much of her land is still worked as a hay farm. She placed 700 acres in a trust to Alaska Pacific University to be used for educational purposes, requiring that much of the land remain in its natural state.She was a member of the APU Board of Trustees for more than 20 years, and the college opened the “Kellogg Campus” on her farm, offering courses and seminars there. She also assembled a collection of Alaskana for use by students and faculty.

Besides being a leader in the Valley's dairy industry, she was instrumental in shaping the young Matanuska-Susitna Borough and served as the only woman on the first Assembly (1963-1966). Her passion for politics never waned. A lifelong Republican, in the early 1970s she ran for a seat in the state Legislature but never campaigned against an incumbent Democrat. Using a simple poster with only her name and photograph, she earned 40 percent of the vote and almost won the election.

She has been a trustee of Occidental College and Palmer Public Library, Mat-Su Borough School Employment Security and Public Offices Commissions. She devoted much of her energy to another cause. The Iditarod Trail Sled Dog Race was struggling, and Louise did what she could to help its founder, Joe Redington.

"The complexity of her involvement is what stands out to me," longtime friend Katie Hurley told the Frontiersman newspaper.

"She was a dairy woman, and she was also active in politics and education... She touched the lives of every person she met."

She was active in the Mat-Su Republican Women’s Club.

She received the 1997 Alaskan of the Year Denali Award at age 94.

Ms. Kellogg was awarded an honorary doctor of humane letters degree from APU in 1984.

She was an honored guest at the public celebration in Palmer on Memorial Day 2001 as Alaska’s oldest surviving veteran of World War II.

Ms. Kellogg never married, but raised a niece and nephew.