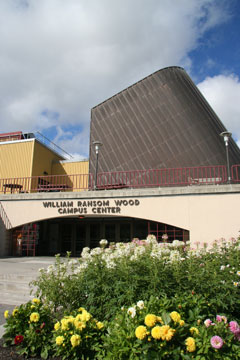 The William Ransom Wood Center was dedicated on Sept. 29, 1972. It was originally decided that the new center would be totally paid for by university students. The Associated Students of the University of Alaska successfully lobbied the state Legislature to provide a special, $4 million low-interest construction loan, which would be paid back from student fees over 25 years. However, in 1980, state Rep. Brian Rogers, who was to be named chancellor of the university in 2009, succeeded in passing a legislative appropriation to take over the remainder of the debt payments for the center.

The building was designed by a UA alumnus to provide students with an antidote to cabin fever. The center features a ballroom and adjoining conference rooms, an eight-lane bowling alley, six pool tables, multilevel lounge, a pub, coffee and espresso café, a pizza place, a large grill and food court and an inspirational “staircase to nowhere." Wood Center is also home to Student Activities and Outdoor Adventures, Associated Students of UAF, the student senate and UAF’s student newspaper, the Sun Star.

Local urban legend says the “stairs to nowhere” in the center of the building (also called the Bird’s Nest) are there because the Wood Center was originally designed to have three floors, and when construction plans had to change due to unforeseen permafrost problems, the stairs had already been built. The original Wood Center plan dispels that myth and shows the stairs standing in their current form.

In 1999, informational kiosks were installed to allow students and visitors access to a variety of information at the touch of a screen. In 2001, Marriott took over the food contract services and remodeled the Grille into a food court with many “marketplace” choices.

Renovations to the Wood Center began in April 2003 and included upgrades to mechanical, electrical and ventilation systems throughout the building. Construction of a new, accessible laundry facility on the upper level replaced the laundry area in the basement. Renovation of upper level restrooms brought them up to current codes and new ceiling systems were installed in the lower level student lounge and the Pub.

In August 2014, the university completed a major expansion on Wood Center’s west side to create a replacement dining facility for the Lola Tilly Commons. The 34,000-square-foot expansion includes the Dine Forty-nine main campus cafeteria on the upper floor and the Arctic Java coffee shop below it.