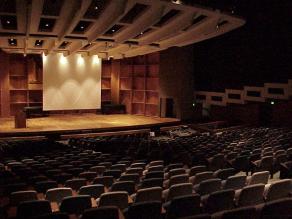 The 1,100-seat concert hall in the Fine Arts Complex was completed in 1974 and dedicated to Charles Davis Nov. 4, 1984. It has acoustical properties acknowledged to be among the finest in the Northwest. For the inaugural concert the Fairbanks Symphony Orchestra performed Tchaikovsky’s 1812 Overture, with cannons from Fort Wainwright set off in the parking lot for the finale.

The Charles Davis Concert Hall is home to the Fairbanks Symphony Orchestra and used by the music department, the Fairbanks Summer Arts Festival, the Festival of Native Arts and others.

The three-manual, 66-stop, 42-rank, Gress-Miles pipe organ specially designed for the facility was installed in June 1982. Although only one rack of zinc and poplar pipes is visible to the audience, the organ has more than 35 racks with more than 1,900 pipes and weighs a total of 15,000 pounds.

In 2002, an $8 million revitalization began on the concert hall and the Fine Arts Complex, including correction of code violations, replacement of heating and ventilation systems for the music department wing and lighting improvements in the concert hall. Renovations were completed in May 2003.