Campus historian William Cashen describes how the Alaska Agricultural College and School of Mines became the University of Alaska, in his book, "Farthest North College President." 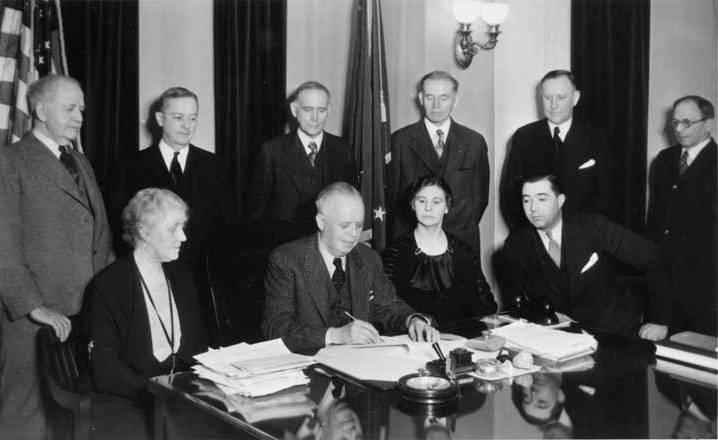 There were three college trustees in the 1935 legislature, representatives Andrew Nerland, A. A. Shonbeck, and George Lingo. These three were joined in Juneau by Mrs. Grace Wickersham, who resided there, and Mrs. Hess, who had accompanied her husband, Senator Luther C. Hess.

The Board of Trustees took no formal action on the Alumni request that they seek to change the institution’s name to the University of Alaska, but Trustee George A. Lingo, who was a member of the Territorial House of Representatives from the Fourth Division, introduced House Bill No. 97 which provided for this change and the bill received little opposition. It passed the House on March 2, 11-2, and the Senate by a 7-1 vote on March 8. It provided that the change be effective July 1, 1935.

On March 12, 1935, the trustees who were in Juneau assembled in the office of the Governor John W. Troy to witness the signing of the bill which changed the Alaska Agricultural College and School of Mines to the University of Alaska. Others present included President Bunnell, James Wickersham, and J.S. Hoffman, Speaker of the House. The pen used in the signing was made of Alaska ivory with a gold point and was given to Dr. Bunnell to place in the University Museum.

Back on College Hill, news of the events taking place in Juneau were somewhat overwhelming. Most of the 150 students and 20 faculty members had paid little or no attention to the Alumni proposal six weeks earlier that the college be renamed the University of Alaska. Others who had heard of the proposal thought it somewhat premature. And then, suddenly, it was an accomplished fact: the Alaska Agricultural College and School of Mines would become the University of Alaska on July 1. Perk Lucha, in his Collegian column “Campus Glimpses,” remarked, “Something that gives us no end of worry is to think of becoming universitarians. We just have to get busy and find out all we can about them, how they look and act and so on.”